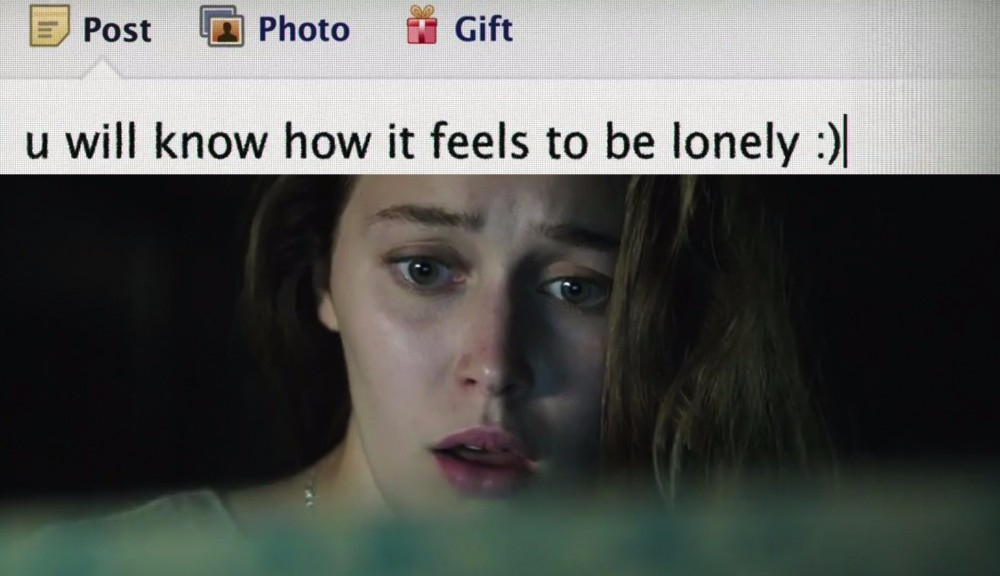 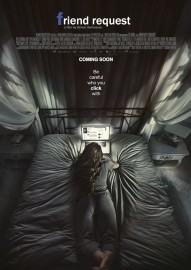 A relatively new horror genre, social media horror is an apropos reflection on our Internet culture. Along the lines of the 2015 movie Unfriended, Friend Request by German director Simon Verhoeven, is not just another Facebook thriller. With a screenplay by Verhoeven, Matthew Ballen and Philip Koch and starring Alycia Debnam-Carey, Liesl Ahlers, Brit Morgan, William Moseley and Connor Paolo, Friend Request has its own style. With references to Internet addiction, the film provides a wry comment on social media infatuation.

When highly popular college student Laura (Debnam-Carey), who has 800+ Facebook friends, is pursued by the eccentric Marina, with zero Facebook friends, trouble begins. Laura, a psychology major, feels sorry for Marina, and so becomes her first and only Facebook friend, and thereafter a hellish struggle ensues.

Opening with a professor announcing to his class news of a student’s suicide, intensifying ominous, dramatic music sets the tone as wide-eyed students ask “did she film it on her webcam?”. Although a very scary film with many shock moments, Friend Request is also hilarious at times, a roller coaster of sudden terror then bursts of laughter. Finding herself friended by the deceased Marina, a classmate tells Laura “Unfriend that dead bitch”. A girl on a policeman’s watch shoots herself while he chats on his mobile, and his partner exclaims in disbelief “Really?”.

The plot itself is formulaic, with several clichéd scenes of a person alone, hearing a strange noise, lights going out, and inexplicably walking toward the noise while the viewer thinks “run the other way” – tongue-in-cheek, perhaps. Some typical filmic horror/thriller themes in this movie have been done before, for example, the obsessed friend (Single White Female, The Roommate!) and killer technology (The Ring). There are references to other films such as Stephen King’s The Shining, and scenes reminiscent of The Blair Witch Project, Amityville Horror, Halloween II, and Visiting Hours.

What distinguishes Friend Request from the teen-style horror genre is its plot surprises, an understated irony, and stylish, interesting visuals. Social media and cinematics combine as a multimedia collage with Facebook-style images displayed. Many social media selfies and photos flash across the screen with quick edits from shot to shot mirroring the short attention span of the Internet Age.

Frightening, funny, with excellent visuals and sound, Friend Request will take you on an entertaining, wild ride.