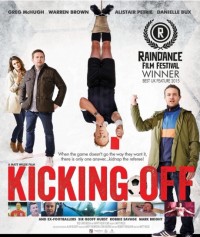 Kicking Off is a humorous commentary on the insidious effects of sports mania – an intoxicated, unnecessary mania that, in this case, causes two emotionally misguided football fans to commit a serious crime.

Director Matt Wilde engineers a comical cinematic rollercoaster that conveys the story of two relatively innocent stumblebums who make a big mistake: they let their zeal and loyalty for their favourite football team bleed into real life, and, upset by a bad call, Wigsy (Warren Brown) drags his best friend, Cliff (Greg McHugh), into an impromptu and ill-advised kidnapping of a referee (Alistair Petrie).

Is the film funny? Yes. One receives a healthy dose of schadenfreude seeing the abductee jostled and mortified (especially considering his smug, self-righteous attitude), and Cliff does a masterful job of firing off multiple F-bombs in rapid succession.

Albeit funny, Kicking Off falls short in terms of plot an characterisation. Wigsy, the most conflicted and complex character and the one who drives the action, has a hackneyed backstory that feels a bit forced and, during a protracted scene in an abandoned church, a half-successful attempt is made to add unnecessary depth and create superfluous conflict between Cliff and Wigsy. Many of the protagonists’ choices are hard to believe, even for a comedy.

Putting aside plot flaws, which are very common in comedic films, and clumsy use of Deus ex machina, the movie is beautifully shot and edited (especially if you like jump cuts and split screens), and makes clever use of overlapping flashback, infused with breaking of the fourth wall and visually-stimulating dream sequences.

In the end, though, Kicking Off does not avoid some of the classic comedy pitfalls; it is reliably funny and strangely compelling, leaving the audience in a state of amusement and contemplation, and issuing a yellow card to sports fans everywhere who might be fans to a fault.

Kicking Off is released nationwide on 21st April 2016.

Watch the trailer for Kicking Off here: