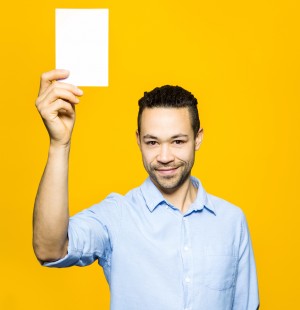 How much do we value choice and do our choices even count? Remote confronts its audience with this question in 90 minutes of interactive theatre. A room full of strangers imagines the future – well that’s what the production tells them. Remote is an algorithm that takes the form of two actors, who, through the course of the evening, create a work of interactive theatre that questions and forces the audience to engage with the politics of choice. This is supposedly the theatre of the future: viewers create the central protagonist and to some degree choose what they do and how they act.

The set is minimalist and futuristic, like an impression of 2016 from someone in the 1980s. The point of the play, however, is not found in its aesthetics, but rather in how it encourages thought: it is a 90-minute mental exercise. In light of last year’s elections, where an outstanding number of people felt there was no point in voting, theatre like this is important, in fact crucial, in reminding us that our vote can count. It forces us to communicate with our peers, breaking down barriers between strangers, and equally gives us an impression of other people’s personalities by the choices they make.

Angela Clerkin and Tom Lyall succeed in keeping in role, which is essentially to speak in a monotone voice and imitate robots, while they use the audience’s choices to create the script. There are a few slip-ups, a few choices forgotten, but on the whole they are engaging. It is difficult to compare this production with ordinary theatre because it is so different. Whilst it is enjoyable and thought-provoking, it is a disheartening version of theatre of the future – a future in which we all become the authors, just as through Instagram and social media, we are all becoming photographers and critics. It is pertinent and playful; watch it if you want to be engaged.

Remote is on at the Camden People’s Theatre from 19th until 30th April 2016, for further information or to book visit here.

BalletBoyz: Life at Sadler’s Wells Theatre | Dance review
Joachim Trier: An interview with the director of Louder Than Bombs