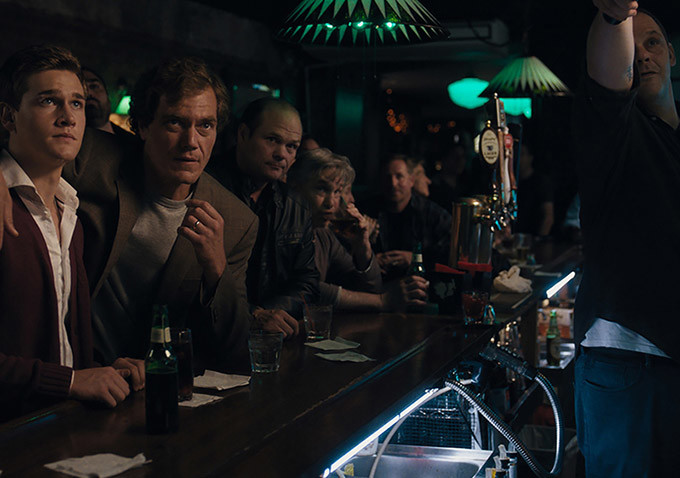 Bart Freundlich’s Wolves has been received with enthusiasm at Tribeca Film Festival this year, and no one is happier than the film’s director/screenwriter Bart Freundlich.

It isn’t exactly a feel-good movie. High school senior Anthony (Taylor John Smith) is the star basketball player on the Saint Anthony High School team. The Wolves are play-off bound and “Saint Anthony” is close to securing an athletic scholarship to Cornell University. However, life off the court is not as easy for the quiet teenager. His father Lee (Michael Shannon) is an English professor with a serious gambling problem. Anthony’s mother Jenny (Carla Gugino) and Uncle Charlie (Chris Bauer) try to provide a sense of normalcy, which becomes more difficult as Lee incurs bigger losses as the basketball season reaches its climax. Anthony also has a father figure in Socrates (John Douglas Thompson), a former NBA player with no qualms about being hard on the coddled school hero.

The formula – hard-luck, well-meaning kid, bad dad, long-suffering wife/mother, fallen sports star seeking redemption, the big game with everything riding on it – is nothing new. Freundlich adds touches, such as the big business of Catholic high school sports and the serious injuries these young athletes suffer at pre-professional level. It is also a New York story with downtown location shots. But what really makes Wolves different is the care taken to tell it.

Taylor John Smith is a tall, good-looking young man who could end up in one of “those” other teen movies, thanks to this part. Smith internalises Anthony’s dreams and anxieties, letting everyone else do the talking for him – except on the basketball court. Tribeca darling Michael Shannon gives another tremendous performance as Lee, playing not only a dangerous parent, but also an inept teacher who doesn’t use PowerPoint for his uninspiring lectures. Still, he and Freundlich never make Lee a literary or movie cliché; he’s complicated, even sympathetic. Carla Gugino, Chris Bauer, and John Douglas Thompson are outstanding and believable as the adults offering Anthony the best support they are capable of.

Wolves has a little bit of everything, but a lot of heart.

Wolves does not have a UK release date yet.