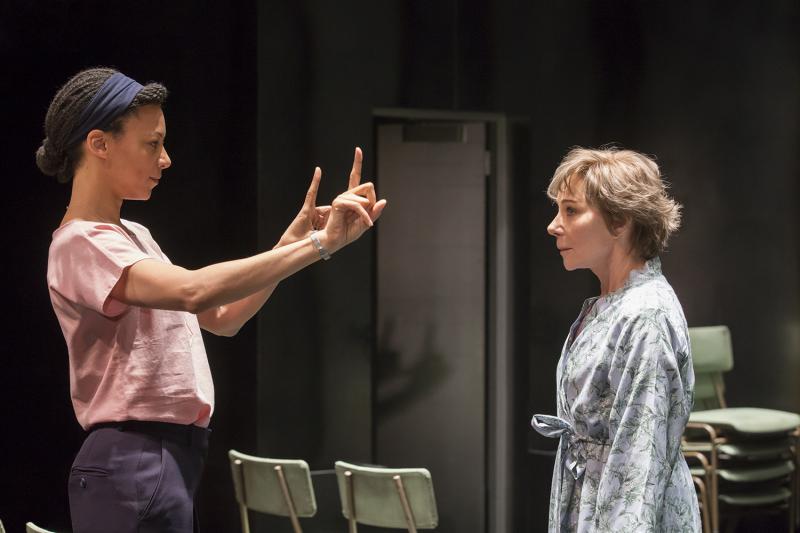 The latest production at the Donmar offers a promising mix of topics including identity, unconditional love and scientific advancement. Playwright Nick Payne has already tackled neuroscience in previous works, and he continues to be fascinated with the idea that the self can be dissected to reveal multiple identities. There are countless elements determining what the “self” is, and he plays with the possibility of removing and tweaking some of these aspects to unveil the dramatic results that can stem from a single change. With director Josie Rourke giving shape to Payne’s vision, Elegy is very sophisticated in its treatment of such delicate themes.

Two women in their sixties are at a crossroads that could break their marriage. Lorna develops dementia-like symptoms and her wife Carrie accompanies her to a medical centre where they discuss their options. Medical adviser Miriam suggests a treatment that replaces the affected brain tissue with a microchip that enables the body to regain its ability to function smoothly, but causes a large chunk of memories – namely, the last 20 years or so – to be erased from Lorna’s mind. This would mean that Lorna would have no recollection of Carrie. The play unravels backwards, beginning with the couple’s first post-treatment encounter, where Lorna treats her wife like a stranger, and gradually moves back to Lorna’s worsening state and the couple’s consultations with Miriam.

Zoë Wanamaker is wonderful in her portrayal of the cool, detached Lorna (as she appears after the surgery) and then as the confused version of the character swinging from anger and frustration to childlike enthusiasm and serenity. Barbara Flynn is very effective as the concerned but collected wife who must hold everything together. The stage is almost bare aside from a few neatly arranged chairs creating a clinical atmosphere. Dominating centre-stage is a large tree trunk, cut through the middle and contained inside a glass cabinet. Every now and then, a thick fog envelops the tree. The space is timeless and without character or detail, which perfectly suits Lorna’s evanescent state.

The main topics of the play are engrossing and begging for exploration, but the production limits itself to scratching the surface. The dialogue invites thinking without provoking debate, with the focus on the characters’ reactions, and there is no build-up in the drama. It’s rather a quiet storm slowly brewing within and around the characters, without ever climaxing into a solution or a higher understanding. Nevertheless, Elegy poses intelligent questions and rewards the audience with great performances.

Elegy is on at the Donmar Warehouse from 21st April until 18th June 2016, for further information or to book visit here.