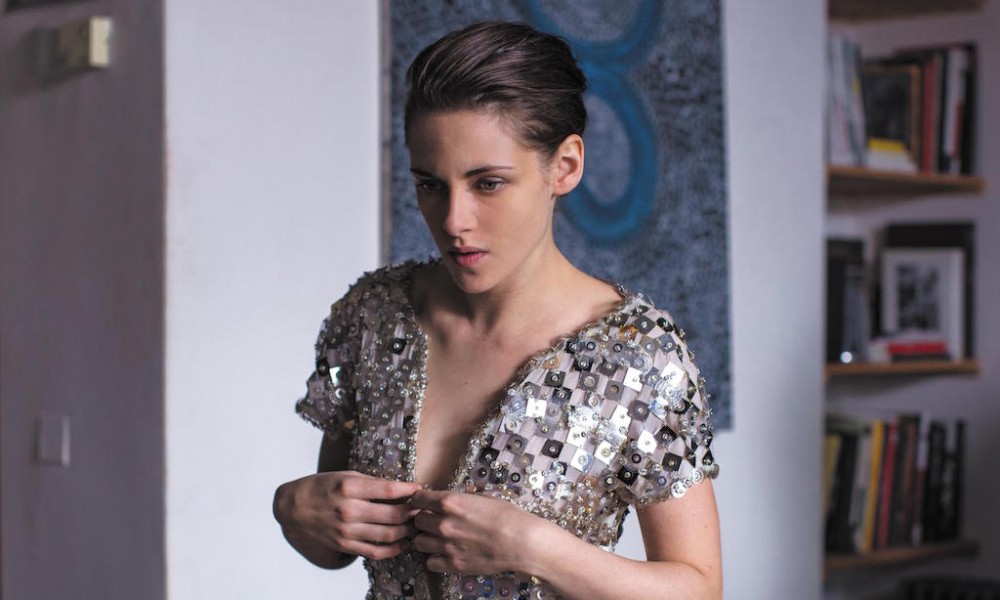 Maureen is a young American woman in Paris making her living as a personal shopper for a celebrity. Also, Maureen may have the psychic ability to communicate with spirits, just like her twin brother, Lewis, who recently passed away. She soon starts receiving ambiguous messages coming from an unknown source. Here’s a chat with Kristen Stewart, who portrays Maureen in Oliver Assayas’ latest picture Personal Shopper. 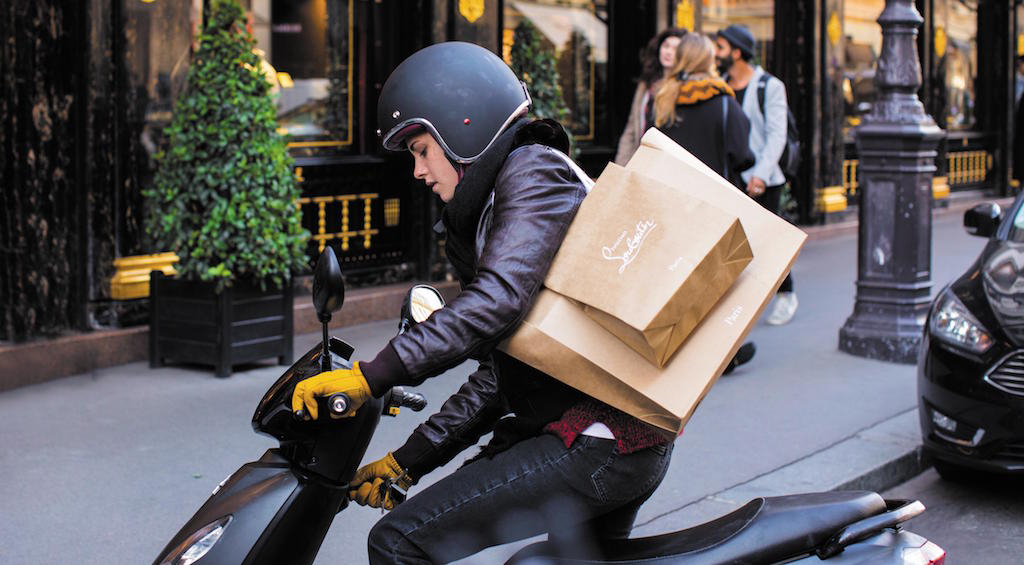 Did you think you would work again with Olivier Assayas so quickly, only two years after Sils Maria?

No. But I knew he liked acting with the same people, actors and technicians. So, deep down, I hoped I would. We got along really well on the set of Sils Maria and I figured, sooner or later, we’d work again on a creative project. But I had no idea it would be so soon! I’m a good friend of Olivier’s producer, Charles Gillibert. He’s the one who told me Olivier was already working on a new script. I think we were in Cannes for Sils Maria. Honestly, it was the first time I’d ever met such a close-knit group of people who formed a real team. I didn’t want to leave. We were made for each other! I feel very lucky. So, when Olivier offered me the chance to act in Personal Shopper, I’ll admit I was excited, but not surprised. We really wanted to continue our experience as a group.

One gets the feeling that, in you, Olivier Assayas has not only found an actress, but also the ideal person to embody the kind of modern young woman he has always wanted to portray in his films. Can you say the same for him? That he’s director you’ve always been looking for?

Yes, hands down. We’ve both worked with a lot of people. But we share a non-verbal form of communication that is perfect in our profession. We don’t talk a lot, but we understand one another and share many of the same interests, as well as a similar type of curiosity. It’s a lot of fun to work with him.

How did Olivier Assayas come to you with Personal Shopper?

He told me he was writing a very simple script, and that he was writing it for me in the hopes I’d like it. When I received the script, I was really scared because it was hard for me to imagine calling up Charles or Olivier and telling them it wasn’t for me! Thankfully, that wasn’t the case at all. Once I read it, I was very impressed. It was so different from Sils Maria. For me, most of all! I thought I knew Olivier, but I couldn’t fathom how he’d come up with this story. It opened my eyes to the more hidden aspects of his personality. It’s a very contemplative film. In Personal Shopper, Olivier is able to evoke invisible worlds in his own way without naming them. I think it’s a more personal film than Sils Maria. It isn’t analytical; it’s a sensual and deeply human film. Olivier is a cerebral filmmaker who was able to express very private emotions in this film. It was really cool. I hadn’t felt that from him in Sils Maria.

Personal Shopper examines uncommon themes in French cinema, like ghosts or spiritism, while remaining quite different from American thrillers involving the supernatural.

Yes. In Sils Maria, Maria, played by Juliette Binoche, and my character, Valentine, are having a conversation about movies. They disagree on a film they’ve just seen about mutants in space. Valentine says there’s just as much truth in fantasy or sci-fi than in a lot of supposedly “more serious” films. These movies use symbols and metaphors – but that doesn’t make them more superficial. They ultimately talk about the same things and examine the same subjects explored by openly psychological films. It’s funny to think that Olivier literally based his following film on a line of dialogue from Sils Maria. Personal Shopper is also a genre movie, which sets it apart from most French auteur films. It’s a genre film that doesn’t try to scare us with ghosts but, instead, offers a reflection on reality. The film also asks what, in my opinion, is the most terrifying question in life: “Am I completely alone, or can I truly enter into contact with someone else?”

What was the most difficult aspect of working on Personal Shopper?

I play a young woman who is very lonely, completely isolated and sad. It was exhausting to be in that character all the time. Even when I was in a scene with other actors, I could never really be with them. It’s as if they were all ghosts. I didn’t consider myself to be a finite person. There couldn’t be the slightest interaction between me and them because I didn’t really feel like I existed. That plunged me into a very painful state. Thankfully, I was surrounded by people I love and never felt alone. I was very lucky. If the atmosphere on set hadn’t been as positive or friendly, I would have been devastated and probably collapsed on the floor. In the film, I never stop rushing from one place to another. I’m in constant movement. I lost a lot of weight during the shoot. It was exhausting.

Maureen hates her status as “personal shopper,” as well as her rich and famous boss. But she can’t help trying on this woman’s clothes, transgressing different taboos – and have fun doing it.

Maureen is fascinated by the same thing she hates. She is going through an identity crisis. I love the fact that she is not shown as a feminist criticising the superficiality of consumer society. She is going through an internal struggle. She is very attracted to this world, where her career is starting to take shape. But she is ashamed of this attraction. I’ve felt this at times, as we all have to a certain degree. The story takes place in the world of contemporary fashion, but it could have taken place in 1930s Hollywood. I don’t know if things were worse or better back then. People have always been attracted to all that glitters. Like tiny moths.

Personal Shopper deals with mourning. But it’s also the story of a young woman’s emancipation, trying to find freedom by taking a very strange path.

Yes. The greatest periods of my life have always been preceded by disasters. Moments of serenity or fulfillment often follow traumatic events. You feel more alive if you’ve had a brush with death. At the end of the film, even if she hasn’t found what she was looking for, Maureen is ultimately able to start over.

How did you prepare for the role of Maureen? And, how important is the physical appearance of your characters for you?

Absolutely important. I wanted people to feel like Maureen was a twin looking for the symbiosis she lost when her brother died. So, I imagined her to have a very simple, almost androgynous look. Her appearance also reflects her love-hate relationship with the fashion world. Therefore, the choice of clothing was very important. Regarding the preparation of the film, I always only read a script once, then refuse to look at it again. That way, I discover the scenes everyday on set. I didn’t have anything to learn in particular for the film. Olivier wanted to shoot earlier in the year so I could follow up with the Woody Allen film, where I play a young, charming, feminine and joyful girl. I felt incapable of doing both films in that order. I knew that – after everything I’d go through for Personal Shopper – I’d be ravaged and none too pretty by the end of the shoot! I didn’t really prepare, but I knew where to look for what I needed. I knew where to find the trigger, and all I had to do was pull. I was ready to do it for the film.

You filmed in the streets of Paris with the crew of Personal Shopper 48 hours before the November 13th attacks. It’s hard not to think of that while watching the film, which seems to be charged with a tension and anxiety specific to our time.

When I see the film, I tell myself that we’re all in our own world, completely absorbed by things that concern us, and us alone. Maureen is so consumed by her obsessions that she pays almost no attention to the people and things around her. She isn’t really in Paris, or anywhere for that matter. It hurts when I watch the film, which portrays a character running around Paris – a city that’s about to be terribly wounded – without ever experiencing even the slightest pleasure. It’s very painful and poignant. I hate to put it in these terms, but we were lucky. The day after November 13th, we had to start a new day of shooting, but it was nearly impossible to work. Everything seemed so fake. Shooting a film in a studio…

Before your two films with Olivier Assayas, what was your relationship to French cinema?

I’d seen a few essentials, like Breathless and Jules et Jim. Charles, Olivier and the whole crew opened my eyes to a new world of film screenings and cinephilia. I discovered a lot of French films on DVD. It was a unique experience for an American actress to suddenly find herself to be part of that universe. It’s really cool. In Hollywood, everyone shares the same values. Here, in France, it’s much more disparate and feverish. In the US, films are made to entertain and make money. Auteur or art films occupy a tiny sliver of the industry. Ultimately, the filmmakers I like best in the US are those who share a certain idea of film that is closer to some European and French auteurs. In France, one’s motives for making a film are not the same as in Hollywood. There’s a desire to take risks, unlike big-budget American movies, which are only interested in repeating tried and tested ideas.