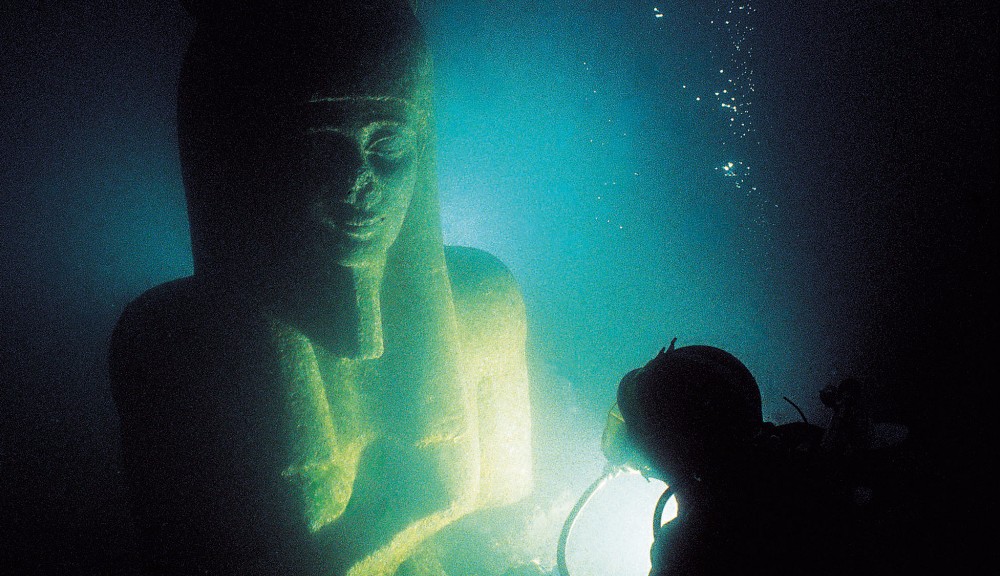 The summer’s major blockbuster at the British Museum is the institution’s first exhibition of underwater archaeological discoveries. The show brings together finds from two recently excavated ancient towns off the coast of Egypt, along with comparative treasures from the museum’s permanent collection. All these new finds should make for a stellar show, but the results are unfortunately mixed.

There are certainly some beautiful and striking pieces on display. Three giant statues, glorious on a colossal scale, stand backlit by an eerie green light, intended to recall the submarine atmosphere in which they were found. The presentation is effective, although the piped sounds of bubbling water that accompany the viewer around the exhibition take the underwater theme a step too far.

One of the highlights is a dark stone sculpture of Arsinoe, the sister and wife of Ptolemy II. Extraordinarily sensual, as well as sexual, this representation of female fleshly beauty seems almost modern, but it is also a bizarre monument to incest; the marital habits of Ptolemaic siblings are both uncomfortable and unfathomable for a contemporary audience, but the British Museum skirts over this thorny issue and instead uses this stunning sculpture to make an academic point about the confluence of Greek and Egyptian visual culture.

This points to one of the major problems with the exhibition: Sunken Cities is pitched as an exciting, discovery-led tour through underwater wonders from a crossroads of ancient civilisations. Unfortunately, however, the real wonders on show are accompanied by conservative explanations, and not given enough space to shine as they should. Instead, they are dragged down by other less-than-fascinating displays of ritual ladles, small statues and boxes, all sadly corroded by their long stay under the sea. In fact, many of the other star works in the show are not from the underwater cities at all, but from the British Museum’s collection, tacitly admitting that, although Atlantis-like cities might be exciting, archaeological items are much better preserved when left on dry land.

It’s a shame the curators weren’t ruthless enough to cut down the content and create a more streamlined exhibition focused on a few key pieces, using them to draw out historical figures and cultural crossovers. There are some truly stunning works in Sunken Cities (which are almost certainly worth the entry fee to see) but they’re overwhelmed by overall experience of this unusual show.

Sunken Cities: Egypt’s Lost Worlds is at the British Museum from 19th May until 27th November 2016, for further information visit here.