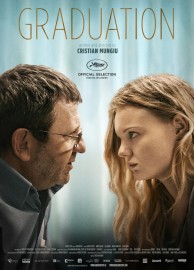 Former Palme d’Or winner Cristian Mungiu returns to Cannes with Bacalaureat, an engrossing study of conflict between public morals and necessary compromises. Another Romanian entry to this year’s competition, the slowly unfurling tale depicts the insidious effects of endemic corruption within the Eastern European country. The thin end of the wedge is represented through nepotism and small favours, which spiral deeper into blackmail attempts and criminal injustice. But this is mostly a film about fathers and daughters: a parent’s choice of offering paternalism and positive liberty, and a child’s desire for independence and autonomy.

Adrian Titieni plays Romeo, a respected doctor in a small Romanian town near Transylvania with a network of useful contacts across a variety of public institutions: in health, education and the police. His daughter Eliza (Maria-Victoria Dragus, of Michael Haneke’s The White Ribbon) is a brilliant student, due to earn a conditional scholarship in psychology at Cambridge University. The day before her final exams she is assaulted and raped outside her school by an unknown assailant. Men, including her father, emphasise the assault; women, including her mother Magda (Lia Bugnar), do not dare downplay the fact that it was rape, despite the apparent flaccidity of the attacker. The fracture is only the beginning of a severance. Romeo’s concern for his daughter is twofold: obvious anguish at her injuries, but a further acknowledgement of the importance of her upcoming exams. Sensing Eliza’s disillusionment and distress, he attempts to circumvent the rules of the process, enlisting help from various high-ups to whom backhand deals are common currency. The film then carefully and complexly attempts to pinpoint whose best interests are served by such machinations.

Mungiu fascinatingly and painstakingly prods at the moral dilemmas that dominate Romeo’s life. Romeo cares deeply for his family, but is a constant philanderer. He believes in teaching honesty and respect, but eschews both traits when the occasion suits. As he castigates a young boy for throwing stones, we see an explanation for Eliza’s new-found resistance and disdain for her father. There are problems: the middle section is extremely cluttered, with several plot strands later left by the wayside, and Dragus’s performance as Eliza is a strangely muted one. Minor issues though, this is thoughtful, absorbing filmmaking.

Bacalaureat (Graduation) does not have a UK release date yet.