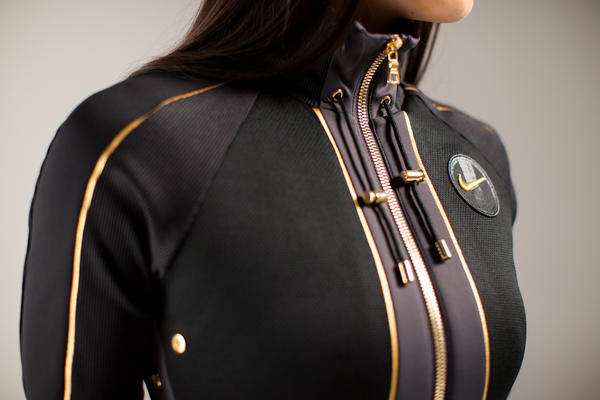 Creative director of Balmain, Oliver Rousteing, is set to launch his football-inspired collection with NikeLab on 2nd June.

The men’s and women’s range will consist of football-inspired apparel and footwear. Old silhouettes from Nike’s football kit have been re-worked and given a contemporary aesthetic that cleverly blends athletic functionality and high-end fashion. The all-black products are adorned with gold details adding a luxury finish. Furthermore, gold symbolises the colour of champions.

“Fashion is usually about the catwalk and the glamour, but with Nike it was about performance and the athletes. What I love about this collection is that we are integrating the iconic style of football into sport style,” explains Oliver Rousteing.

For the French fashion designer, the sport brought back fond nostalgic memories from his childhood. Therefore, he was particularly meticulous about every single detail revolving around the overall look and energy of the collection.

“Oliver was obsessed with the complete look, making sure each piece worked together not just within the men’s and women’s collections, but also between the two. At every design review, he’d ask, ‘Would a football player really wear that? That question helped keep the collection rooted in sport,” according to NikeLab senior apparel design director Jarrett Reynolds.

This certainly isn’t the first time Nike has teamed up with notable fashion houses. The American sportswear brand is going to launch its second collection with Givenchy head designer Riccardo Tisci.

Indeed, the fusion of sportswear and high fashion is a noticeable trend that has increased in popularity in recent years, paving the way for sportswear garments and footwear to be transformed into sought-after luxury pieces.

Hence, if this popular market trend is anything to go by, it’s safe to say that Oliver Rousteing’s latest project is forecast to cause major excitement amongst fashion and sports enthusiasts this summer.