Feminism Is for Everyone: An Intelligence Squared event with June Eric-Udorie, Catherine Mayer, Jess Phillips and David Baddiel 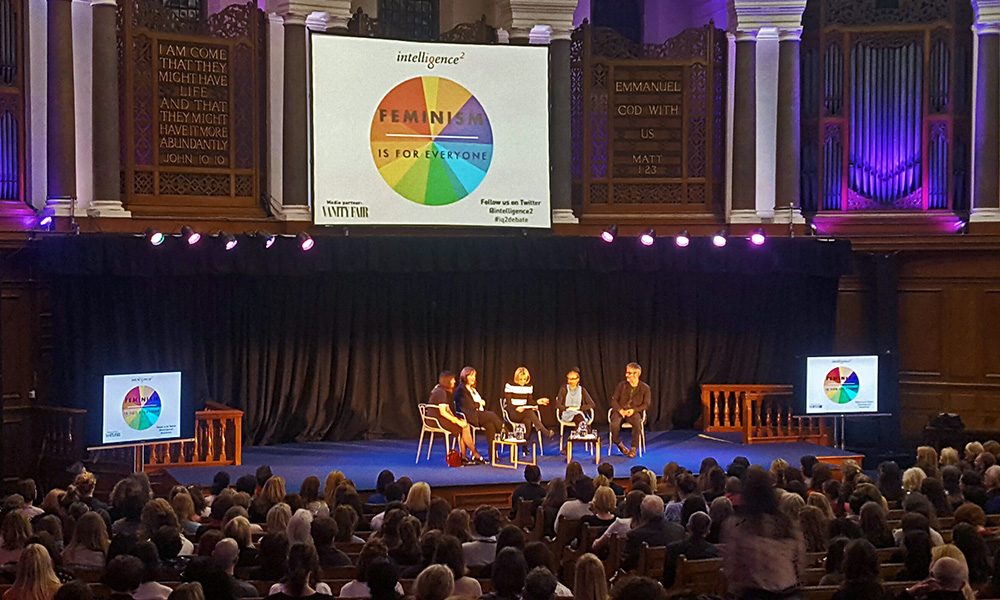 Feminism Is for Everyone: An Intelligence Squared event with June Eric-Udorie, Catherine Mayer, Jess Phillips and David Baddiel

Held on International Women’s Day, Intelligence Squared brought together a fantastic panel of speakers to discuss “Feminism Is for Everyone”.

BBC newsnight presenter Emily Maitlis chaired the event, from the outset clarifying the discussion was not to be focused on the merits of feminism as such – taking equality as a given aim – but rather the inclusivity of feminism and how the so-called “fifth wave” has played out in our current climate.

The panel took as their starting point recent events – predominantly the election of Donald Trump whose rhetoric and policies pose a challenge to many pro-feminist aims – which have seen the progress toward gender equality suddenly come under serious threat after enjoying years of incremental improvement. But specifically, discussion aimed to zoom in on recent criticisms of the latest wave of feminism for its elitism, dominated by white middle-class liberals as opposed to representing and forwarding the aims of the full spectrum of women.

In particular, journalist and activist June Eric-Udorie lambasted the movement for ill-understanding intersectionality, first and foremost pointing out she was the only black woman on the panel: “It may make you uncomfortable. But I have to say that.” Drawing on a history in American and British politics of racism in such movements, in particular the suffragette movement, she feels there is still a huge problem with sections of society being left out of the small amount of progress made, and some voices not heard. As an 18-year-old campaigner and journalist who has already spoken at the UN and is working on an anthology of intersectional feminism, Eric-Udorie saw herself as an example of throwing off “imposter syndrome” and taking up her right to speak on such platforms. Challenged over what she would like to see change, she highlighted feminists should “be aware of their privilege” and rather than focus on “grand acts of feminism” take small steps to acknowledge and assist those too often marginalised.

David Baddiel made light of being the representative of his gender in the discussion: “I think I’m here to prove this is the inverse of another BBC panel show…” The comedian, actor and writer brought a natural humour and contrasting insight, highlighting the inherited understanding of what it means to be a man as not only damaging to women’s position in society but men as well: “Suicide is still the biggest killer of young men in the UK. Working class men particularly – they don’t feel they have a way of expressing themselves.” For him, crucially important is a toxic prevailing paradigm where mainstream media (cringing that he used Trump’s term, though unavoidable) is selling itself on images of women, feeding a stereotyped idea of a what a women should look like: “Everywhere you look, we are faced with a one-dimensional woman designed to sell you something – we don’t notice this enormous objectification of women everywhere.”

Catherine Mayer, has just launched a new book Attack of the 50ft Women: How Gender Equality Can Save the World and is president and co-founder of the relatively new Women’s Equality Party. She made the case for forming a party to address pressing issues of gender equality (or persistent lack thereof) despite the risk it could dilute the vote for the left: “Mainstream parties can’t deal with gender equality properly. We need a party to truly focus on gender issues.” Asked if “Christmas Day for women” or International Women’s Day was a good thing she pointed out that as a long as such a day is needed, “every other day is men’s day”.

Staunch defender of women’s rights in politics and beyond, Labour MP Jess Phillips was witty and cutting in her direct comments about challenges in the political arena and particularly within her own party, where a white old skool “virtuous” left is currently ruling the roost: “Harriet Harman says she doesn’t know Jeremy Corbyn very well. Someone can’t claim to be hot on women’s issues if they don’t know Harman…” Philips was keen to emphasise the importance of practical solutions, stating that culture does not change on its own, it takes intervention: “Structural problems need structural solutions.” A good example being parental leave and childcare support policies: “I took off time to look after our kids because my husband can’t lactate. And he earns more. It’s logistical as much as it is about stereotypes.”

At the heart of much of the discussion was power – historically women haven’t had it, society is still a bit squeamish about women gaining it, and certainly it’s not something those who do have it are keen to give up, with Maitlis summarising: “No-one will relinquish power – you have to seize it”. Indeed, Phillips advised above and beyond discussing gender inequality: “Everyone here should get involved in politics. I felt powerless once, but now I’ve changed nine laws.” Bring on feminism 5.0.

Photo: Courtesy of Feminism Is for Everyone / Intelligence Squared

For further information about Feminism Is for Everyone and future Intelligence Squared events visit here.

The editorial unit
Read More
Scroll for more
Tap
March for Women 2017: Trump’s given the women’s rights movement something to rally against
The day the music died: Business rates are forcing London music venues to close