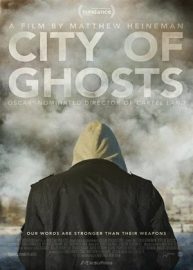 As Raqqa, an otherwise quiet and unremarkable city in Syria, is violated and occupied in 2013 by the Islamic State of Iraq and Syria (ISIS), militants waving flags declare: “Join us, before we enforce it on you”.

After the immense success of the Oscar-nominated Cartel Land, American director Matthew Heineman is back with this eye-opening and harrowing film, documenting the courageous efforts of Raqqa is Being Slaughtered Silently (RBSS), a group of Syrian journalists who risk their lives to report on the happenings within the city.

Opening with high spirits and cheers at the Committee to Protect Journalists Awards and benefit dinner in New York, the RBSS members smile and pose for pictures; but hidden behind their eyes is unimaginable pain and horror – unfathomable to the majority of us within First-World countries.

The film depicts realities such as poverty, executions of those who speak out against ISIS, and children being indoctrinated – portrayed horrifically in a scene where a small child, no older than five, happily beheads a teddy bear. Not long into the documentary one of the journalists is detained, tortured and eventually killed for the anti-ISIS material on his laptop and, shortly after, two more are beheaded. The RBSS reporters, in an effort to avoid execution, flee Syria, seeking refugee status in Germany and Turkey, where they continue to fight with their words and pictures and videos, fed to them by sources via encrypted signals within Raqqa. But even away from Syria, they are unsafe, persecuted by anti-refugee groups within Germany and targeted by Islamic State supporters all over the world.

Within Raqqa, the militant group are cornered by the media, and crack down on undercover sources, destroying satellite dishes all over the city as executions become more frequent. The heroic efforts of the RBSS journalists are not without consequences, and it is clear that many suffer from the overarching guilt of leaving their families and friends behind in Raqqa. Towards the end, a man sits, shaking violently as he thinks about his inside sources who are unlikely to survive.

Filmed with sensitivity and compassion, Heineman focuses in on the members of Raqqa is Being Slaughtered Silently, who work selflessly under the constant threat of death. City of Ghosts is an incredibly important and poignant documentary as well as a clear window into the world of war-torn Syria.

City of Ghosts is released in selected cinemas on 21st July 2017.

Watch the trailer for City of Ghosts here: