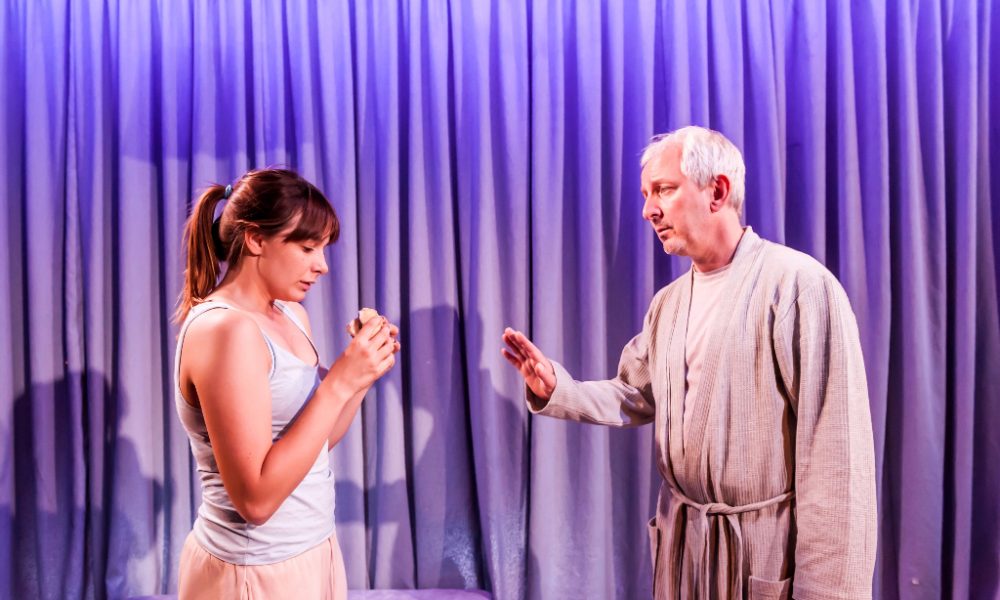 It’s rare that a play turns into an olfactory experience. Yet in an intimate – and fairly sweaty – room at the Old Red Lion that’s what’s on the menu, the theatre serving up the meaty waft of Sarah Kosar’s Mumburger.

In a grisly bit of irony, Tiffany’s militant vegan mum has died in a car crash involving a Birds Eye truck. As Tiffany (Rosie Wyatt) and her dad (Andrew Frame) try and muddle their way through the funeral arrangements they are interrupted by a rather cannibalistic delivery. That’s because dear ol’ mum has turned herself into a pile of burger patties, to be eaten as a “digestive memorial”. It’s macabre stuff, especially when director Tommo Fowler has the pair cooking the burgers. Placed on a metal-topped table a kitchen torch is used to char the meat, mixing the nose-twitching delight of a barbecue with something a bit more crematory.

What seems like a very fringey concept ends up being a deft exploration of the traditions and rituals we perform to maintain someone’s memory, and those we gradually shed once freed from obligation. The digestive memorial becomes wrapped up with the idea of vegan “cheat days”, while Tiffany blurs religion with secular consumption as she says a mum-specific Hail Mary before sampling the mother-meat. These traditions aren’t limited to the carnivorous – Tiffany’s dad repeatedly watches Father of the Bride, both as a (pretty shoddy) parenting guide and to preserve the memory of his partner’s favourite film.

Beyond the literal example sizzling on the side, Mumburger also looks at what we leave behind. The protagonist has a very specific idea of her mum that doesn’t necessarily chime with her dad’s view of his wife. The grieving process can cause a clash of perceptions of the deceased that may struggle to be reconciled within something as limited as, say, a funeral service.

So, there’s a lot of heavy stuff – not forgetting a couple of spoken word pieces AND a Steve Martin impression – to deal with between the munching, moments that the actors are only sporadically able to pull off. It takes a while to establish a middle ground between Wyatt’s grief-stricken mania and Frame’s flat depression; at times, it doesn’t feel like they are two people processing death in different ways but actors in two tonally divergent plays. It doesn’t help that Kosar’s writing tends towards the generic until the greasy central conceit drops from the ceiling. When it does all come together in the second half, however, Mumburger is as juicy and tender as the namesake snack.

Mumburger is at the Old Red Lion Theatre from 27th June until 22nd July 2017. For further information or to book visit here.