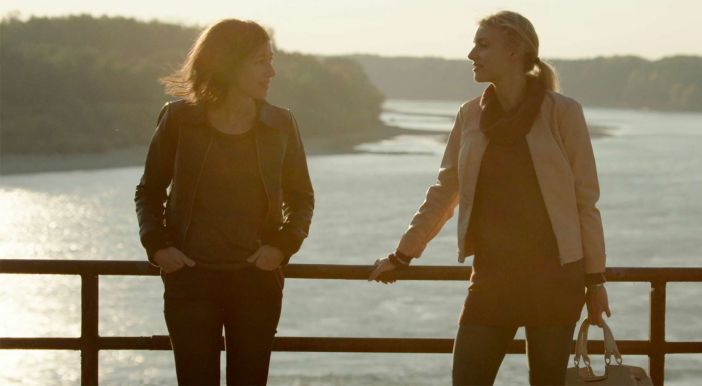 Caravaggio, St Jerome, The Tower of Babel: first the great painter whose work seems inseparable from uninhibited violence and promiscuity, second the learned saint who educated women on how to live (if only for Jesus), and third the biblical construct that led God to scatter a population and create the multilingual world. Nora (a decent Johanna Wokalek) – or does she have a different moniker? – ambles around Austria’s Kunsthistorischen Museum. She has escaped her family; she has grown sick of the routine. A problematic film about contemporary disillusionment and negative liberty, Freedom is deliberately unsubtle about its major theme.

From Vienna to Bratislava, Nora accepts the advances of slimy supermarket men, obtains a somewhat severe haircut, defends an insufferable, philosophically naïve traveller and befriends kindly sex show performer Etela (Andrea Szabová) and her husband Tamás (Ondrej Koval). She maintains the façade with small lies, slight alterations. Meanwhile, Nora’s husband, Philip, and two children await news at home in Germany, the former delivering an excruciating television appeal for her return. Director Jan Speckenbach intriguingly alternates the narrative focus away from and towards Philip (Hans-Jochen Wagner), as we see a gentle, befuddled, bearlike man come to terms with this strange form of loss. This is cleverly upended later as the timeline jolts and we are presented with the small events leading to Nora’s self-imposed exile. We do not expect reconciliation, and the film makes a worthy if inchoate point about understanding selfish acts as means of self-realisation.

As noted Freedom possesses some tidy technical tricks, but the emotional interrogation is left underdeveloped. Nora’s children and law firm colleagues barely display anguish, and even Philip appears subdued as his flickers of rage morph into sullenness. Speckenbach correctly identifies the complicatedness of grasping personal freedoms, but some scenes – hanging up the telephone without a word, a pending court case with a wayward teen – are obscenely trite, undermining the purported radical elements of the picture. There is one shocking split-moment, a surreal transplant of facial expression, but the depiction of sex acts, promised to affront some viewers, is relatively tame. Without resorting to Isaiah Berlin, one can acknowledge that more sophisticated interpretations of positive liberty exist, even if we do finish here with a silhouetted homage to Brueghel’s painting.

Freiheit (Freedom) does not yet have a UK release date.