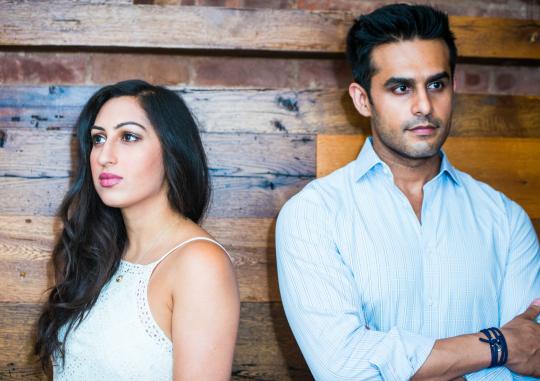 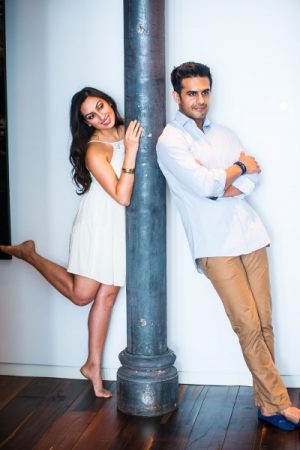 Borders in a Bedroom

A young South Asian woman enters, painting in her bedroom, singing Hindi song Zara Zara Mehekta Hai. British Indian Maya, played by Shiviali Bhammer who writes and stars in this production alongside Shez Sardar as Imran, is a Hindu whilst he is a Pakistani Muslim. The intimate setting of their New York bedroom captures the audience’s attention, as we are drawn into their passionate discussions.

Maya is getting ready for her birthday – as she points out several times through the duration of the play, “It’s my birthday darling”, to which Imran responds, “Happy birthday darling”. Whilst getting ready, the couple touch upon various hot topics, from social media platforms like Facebook and Trump’s presidency to the turbulent relations between India and Pakistan through the years. Maya is a cynic, opinionated and steadfast in what she believes. Imran is the handsome American, also witty and smart. Together they are passionate, their debates sometimes turning volatile. Her long monologue about having children is a funny one, producing plenty of laughs from the audience, but lurking close to the surface is an undeniable truth about the way in which young South Asians are expected to live their life. It is refreshing to see Maya take a stand, though Imran is not necessarily wrong in his desires for a family.

The realism is raw and touching, the script presenting many aspects that young Asians experience. Both performers reflect the complexities and angst of being in an adult relationship, in particular the difficulties faced from being with someone who has different religious beliefs.

Borders in a Bedroom is a humorous play with funny facets to it, and both Bhammer and Sardar represent this young Asian couple well. The script is written with a razor-sharp wit and it’s inspirational to see topical themes represented by actors of colour, something that seems to be missing in theatre as a whole.

Borders in a Bedroom was at Tristan Bate Theatre from 8th until 12th August 2017.

Borders in a Bedroom