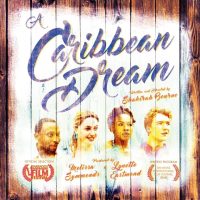 It’s easy to initially believe that Shakirah Bourne’s A Caribbean Dream is another unnecessary adaptation of a Shakespeare classic, yet after winning Best UK Feature at the London Independent Film Festival earlier this year, it was clear that this was to be more than just an average remake.

Opening with captivating imagery of its Caribbean setting, a high standard is set for cinematographer Robin Whenary, and fortunately this quality is maintained throughout, as we follow the stories of the famous four young lovers, beautifully re-imagined within an annual Barbados crop festival. The authentic Barbadian soundtrack only adds to this beauty, as the upbeat rhythms coexist with the Shakespearean verse.

The stand-out performance comes from Patrick Michael Foster’s Puck. Whilst this film was made to be accessible for young people, his delivery so delicately fluctuates between traditional Shakespearean goodness and Caribbean flare that it may well appeal to even the most conventional of viewers.

Much like the original, this piece has bewitching mistaken identities, lovers’ tiffs and chaos. That said, a major change comes in the form of fishermen taking the place of the labourers’ rude mechanicals, changing arguably the play’s greatest scene, the production of Pyramus and Thisbe into a folk tale named “The Untold Story of King Ja Ja and Young Becka”. It at times seems to drag, though credit where it’s due must go to Lorna Gayle’s Bottom, played with as much emotion as the role physically allows.

Unfortunately, what the movie does lack is comedy, as in changing some of the more challenging dialogue to suit a younger audience, much of the charm and wit is subsequently removed. It’s a shame, as this leads to many of the performances feeling dull and incomplete; namely Helena, played by Keisha Pope, who seems to have borne the brunt of the script editing.

This is, however, a charming film that is well worth a watch, and if it’s possible to look past a somewhat flawed script, the visuals and soundtrack alone make up for it, and will leave audiences in awe of its beauty.

A Caribbean Dream is released in selected cinemas on 10th November 2017.

Watch the trailer for A Caribbean Dream here: