Amadeus at the National Theatre 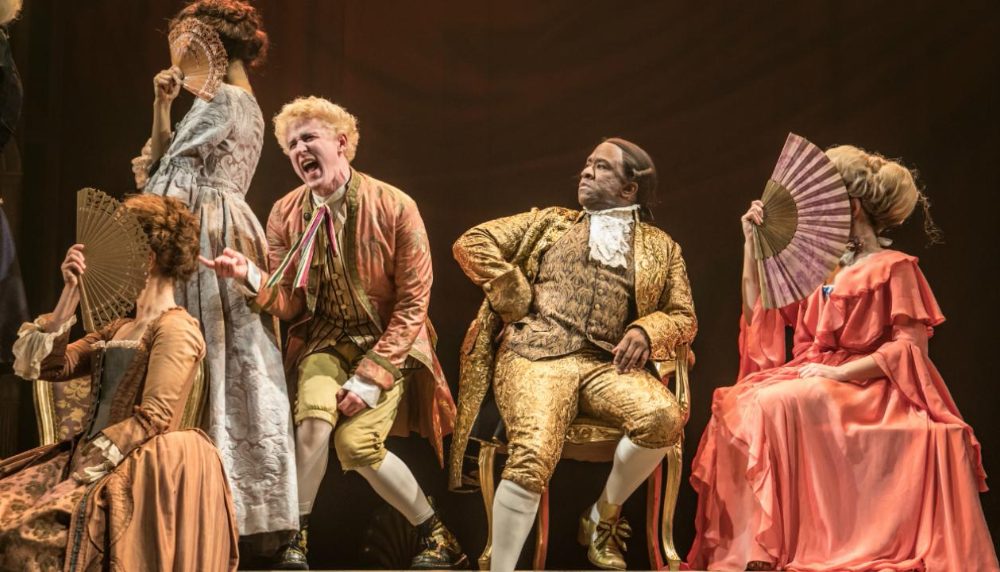 Chances are you’ve met Lucian Msamati’s solemn stare in posters adorning the tunnels of the London Underground. He is Antonio Salieri in the revival of Peter Shaffer’s Amadeus, the epic about the lives of composers Salieri and Wolfgang Amadeus Mozart in 18th-century Vienna, at the National Theatre.

Msamati is absolutely sublime as the envious, self-loathing Italian composer, disappearing into the role and capturing the entire breadth of the complex, contradictory character that won Sir Ian McKellen a Tony award and F Murray Abraham an Oscar. The role of Mozart is revelled by Adam Gillen, who plays the genius with the bombast, perversity and the signature high-pitched rattling laugh as mythologised by Shaffer. He risks overblowing the performance but he’s subdued just in time for the heart-tugging climax.

Michael Longhurst’s production is lavish, opulent in its sets and costumes, especially in the second half when gold becomes a primary colour. The stage shifting and lights sprinkle the aesthetic with further richness. The live orchestral band’s incorporation into the story makes the stage particularly remarkable. The Southbank Sinfonia don’t just provide the compelling music, they’re Viennese citizens who react to the madness happening around them.

One thing Amadeus virgins may be surprised by, after seeing Msamati’s stern look and muted colours in the promotions, is just how hilarious the production is. Erected within the sexual politics, pensive monologues and Fleur De Bray’s stellar soprano is a lot of well-placed humour that can be appreciated by audiences both young and old – though not too young for some of the language is as colourful as the costumes.

Sumptuous displays, a high intensity and compulsively watchable performers ensure that the three-hour running time never leaves a minute for boredom to settle in. This is the second run of Longhurst’s Amadeus at the Olivier following an acclaimed sell-out run last year but even the National Theatre’s 2018 productions have their work cut out for them, for this is the golden standard of theatre. It’s unmissable.

Amadeus is at the National Theatre from 18th January until 24th April 2018. For further information or to book visit the theatre’s website here.

Watch the trailer for Amadeus here: