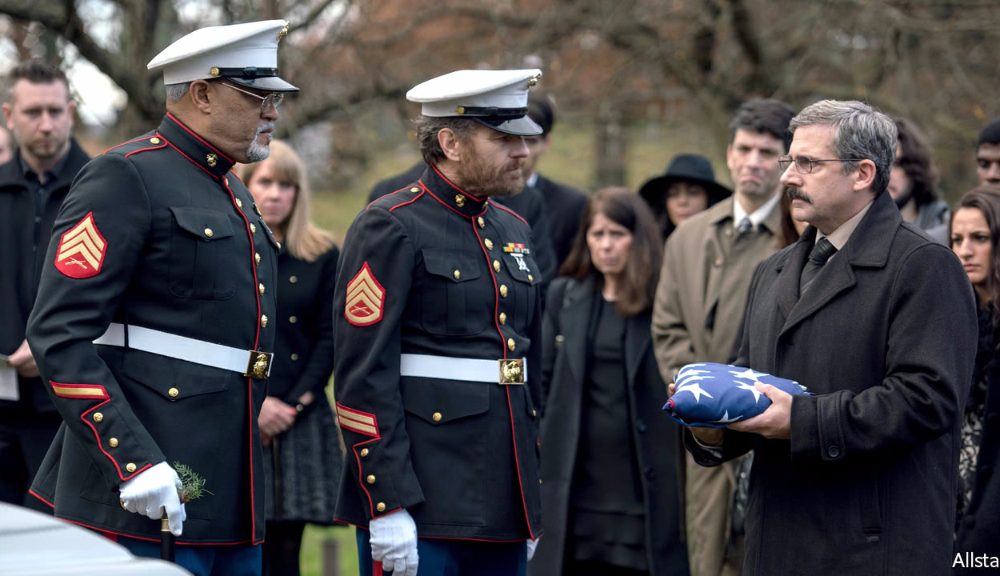 The effects of war don’t stop on the frontline. A statement so easily forgotten in our busy everyday lives and one sung with a substantial crescendo throughout Richard Linklater’s unofficial The Last Detail sequel Last Flag Flying. The director, renowned for his naturalist style and humanistic touch, would seem a perfect fit for a sombre war picture featuring a star trio. The question is, is the final product a work of profoundly moving art, or just simply Oscar bait?

With character references to Hal Ashby’s 1973 The Last Detail, Last Flag Flying follows the reunion of three former US Marines who fought side by side in Vietnam. Set in 2003, Larry (Steve Carell) walks into a dimly lit, smoke-filled bar to reacquaint himself with a former colleague, Sal (Bryan Cranston). After spending the night drinking, Larry proposes he and Sal take a drive to recruit third companion and former marine Mueller (Laurence Fishburne). It is revealed that Carell’s character has united them all following the news of the death of his son Larry Jr, also a marine. After requesting their company and support in taking his son back home to be buried, the three begin a road trip down memory lane as they journey to lay Larry’s son to rest.

Bearing the main components of a war and friendship comedy, the movie strikes a chord with those that have felt the pains of the aftermath of combat. We cannot help but pity Steve Carell’s amiable Larry, a man who has lost everything so painfully quickly, and the actor is brilliantly understated as a man who is attempting to piece his shattered life back together. One thing is for sure, this role presents a very different Carell to one that we may be used to. Alternatively, Fishburne and Cranston represent two differing personalities and characters carrying facades, having chosen to pursue very different paths to move on (or not) from the military lifestyle. Together they have fantastic chemistry, with their differences in persona playing off each other and this helps carry the film through a series of scenes that choose not to follow the traditional three-act format. Cranston carries most of the humorous dialogue, but all three actors bring a different ingredient to the pie to balance the scales.

Following Linklaters naturalistic and realist style, the picture displays contemporary shots, inviting the audience to indulge in a life-like experience as opposed to watching from the side lines. To say the least, Last Flag Flying is exceptionally moving, with a growing gravity as scenes and dialogue flow on. An ultimate climax adds the cherry on top, presenting the inevitable conclusion without slashing apart the true purpose of the film. Through the admirable decision to give a slow and pensive pace to the movie, this witty, comical and sombre piece will resonate with those suffering the loss of a loved one through the horrors of war, whilst also engaging an audience with a real depiction of how these victims live. Is the scent of an Oscar in the air? Let’s just wait and see…