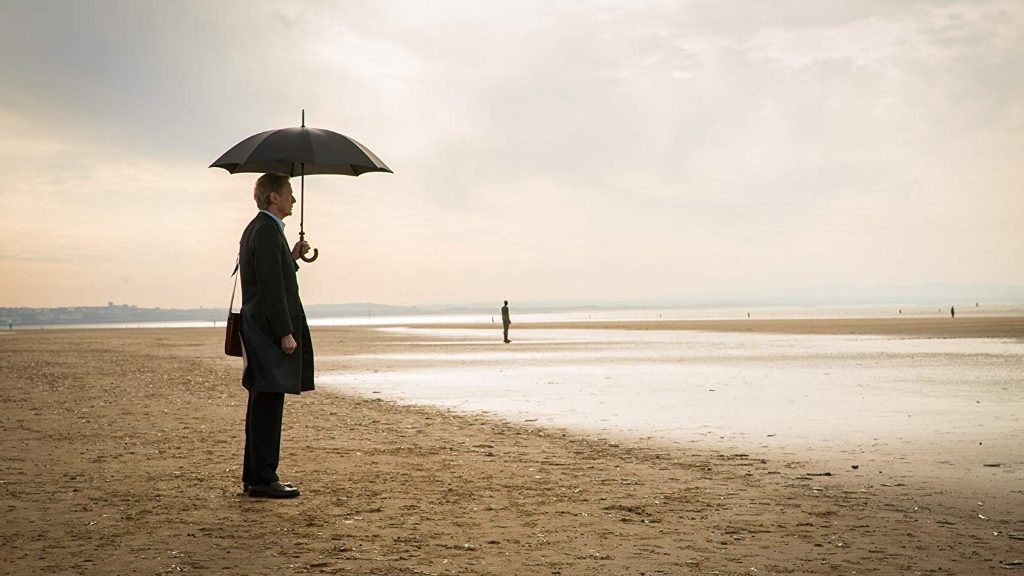 Opening to the iconic silhouettes of Anthony Gormley’s Another Place, Sometimes Always Never is a stark and stylised depiction of the absence left by grief. But like the perpetually shifting sunlight casting shadows across the bleak Merseyside beach, the loss depicted in Carl Hunter’s latest film is complex, elusive and intangible.

Ever since the fateful day when his son left the house during a heated game of scrabble, never to return, father Alan (Bill Nighy) has been haunted by the memory of his child. But while he continues his never-ending search for the boy he lost, his second son Peter (Sam Riley) is forced to live in the shadow of the prodigal son. As Alan’s desperation reaches new levels, the movie explores how the game that ripped their family apart might be the only way to stitch it back together.

The settings in the film are deliberately dated, suggesting a mind that is stuck in a different decade, made static by denial. An art deco hotel with a stuffed fox on display denies us comfort: it is an archaic past preserved but maintaining none of its charm or naturalism. Grainy vistas, skewed shots and frames full of dead space allude to a reality that is forever off kilter. This is probably why Alan’s house is full of meticulous labels, an attempt to maintain some sense of order.

This cold and detached style does, unfortunately, prevent us from finding an immediate affinity with the central characters, and leads to a somewhat strained and stilted pacing in the opening sequence. However, Nighy’s nuanced portrayal of parenthood paints a complex picture of the many subtle faces of grief, which leads us to root for his broken relationship. His rambling monologues and devious scrabble playing bring wit and warmth to the screen, particularly in his bond with his grandson. Though Riley’s Peter is short-tempered, there is an enduring tenderness and his smiles, though hard-earned, do wonders to thaw through the frost.

Unless you have lost a child, it’s not an experience you can ever really comprehend. But Hunter’s film makes an admirable attempt to immerse us in the surreal reality of those left behind after one of life’s greatest tragedies.

Sometimes Always Never does not have a UK release date yet.