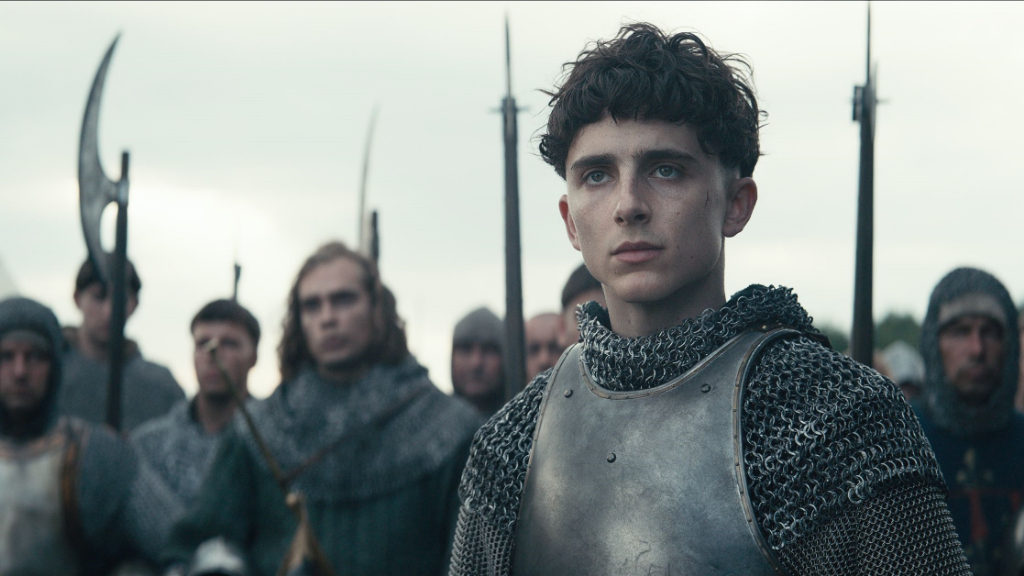 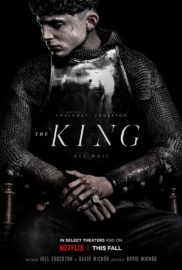 A muddy, bloody spectacle that embraces the true reality of warfare, refusing to shy away from the harsh reality that being King and maintaining peace is never fair. That, along with a series of menacing looks from its lead, is pretty much David Michôd’s The King in a nutshell.

Following the death of his father King Henry IV (Ben Mendelsohn) and his brother, young Hal (Timothée Chalamet) finds himself placed on the throne of a broken kingdom, with peace throughout the land still appearing a very distant and unreachable destination. Being so young, the new King Henry V is held in low regard by the French, taunted by their monarch as he slowly finds his life being threatened by assassins. Recruiting his aged friend Sir John Falstaff (Joel Edgerton) to his ranks, Henry assembles an army that will travel across the channel to show the French forces the true might of the English and hopefully restore not only the nation’s pride, but peace and unity across the kingdom.

Taking inspiration from Shakespeare’s Henry V and its past adaptations in 1944 and 1989, The King features Chalamet, enticing as always, brooding persistently and presenting a more silently courageous Henry than the sprightlier Kenneth Branagh incarnation. Despite an at times questionable English accent, Chalamet’s performance easily surpasses Branagh’s, focusing more on powerfully emotional acting. Questions have to be asked over whether the star of Call Me by Your Name and Beautiful Boy is bruising and jagged enough to embody this historical figure with the best throat-slashing, sword-wielding authenticity, but he embraces the role with endearing charm nonetheless.

His French counterpart the Dauphin, played by Robert Pattinson, is slightly less complex, proving more a cliché of the twisted French villain, his long locks falling over his face as he spits line after maniacal line. On the other hand, this may well be Joel Edgerton’s finest performance. He embodies the famous Falstaff with a brilliant trepidation, sharing the audience’s feelings when it comes to charging into battle thanks to his memories of the past, all the while acting as a comforting presence through all of the politics and bloodshed.

Game of Thrones really raised the bar when it comes to presenting battle scenes on screen. The Battle of the Bastards is probably more common knowledge than the Battle of Agincourt, and The King has taken careful note of this. There is nothing more brilliantly uncomfortable than watching two armies clash iron and cut flesh without the accompaniment of any music. Immediately, the viewer is sucked into the conflict, witnessing every meeting of swords and hearing every groan as knife pierces flesh. A visceral experience to say the least.

The film lacks some satisfactory moments, but in reality we all know that the battle of Agincourt is going to be the defining moment of the movie, much as it was in Henry V’s life. The King undoubtedly provides some gripping cinema, particularly if you are a history buff, and despite a fair bit of fiction and Shakespearean influence being injected along the way, the film is a thrilling experience.

The King is released on Netflix on 1st November 2019.

Watch the trailer for The King here: