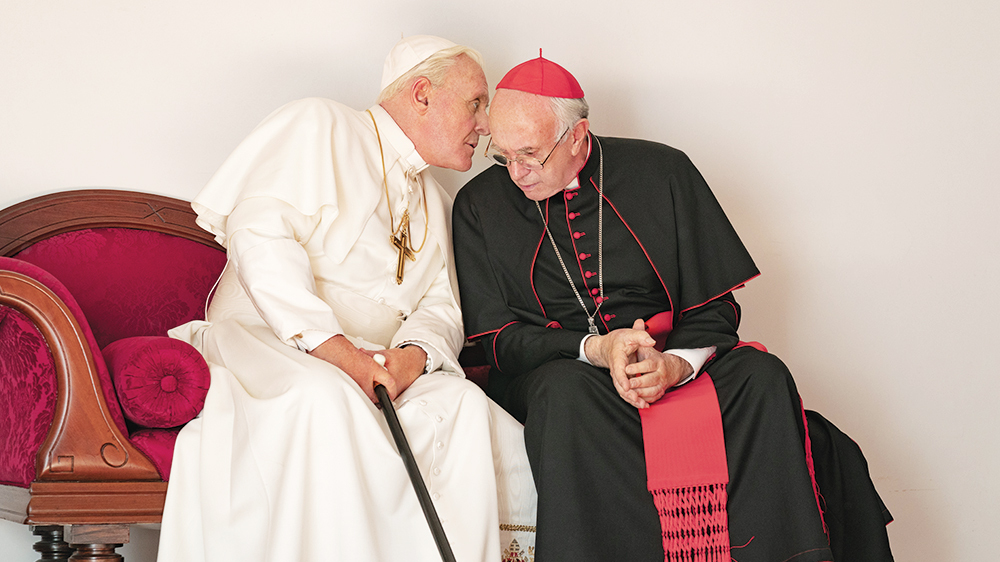 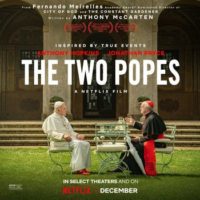 Fernando Meirelle‘s latest feature tells the fascinating story of an ideological collision that changed the course of the Catholic church. The film is an ingenious imagining of what went on behind closed doors during an iconic turning point in history, charting the relationship between Pope Benedict (Anthony Hopkins) and the future Pope Francis (Jonathan Pryce) as they endeavour to build a bridge between their clashing worldviews in order to revivify the Vatican and all it stands for.

Hand in hand, Hopkins and Pryce give us an intimate peek under the papal cap into the minds of two hugely influential religious figures. As Joseph Ratzinger, Hopkins is stately and stubborn, isolated from reality by his staunch conservatism. And yet the actor’s portrayal reveals a delicate vulnerability, a longing for connection. Pryce’s performance proves the perfect salve: Jorge Bergoglio is disarmingly down-to-earth, his progressive perspective bulldozing through the barriers between them. But both characters seek more than common ground: they wish to be absolved of their sins, and through the co-stars’ stunningly crafted confessions, they forge an enthralling on-screen friendship.

Football provides an apt allegory in the film: fans of opposing teams find harmony off the field, just as our protagonists get along when they put their politics aside and accept that everyone bears responsibility. As Bergoglio aptly puts it, “When no one is to blame, everyone is to blame”. Similar parallels are drawn through sweeping shots of his Argentinian homeland, where walls divide the rich and poor, walls that stand in the way of progress. This is a film about change rather than compromise, about evolving to survive. Bryce Dessner’s soundtrack slips smoothly into jazz, a freeform style that indicates a loosening of strict doctrines, while Bergoglio’s whistling of ABBA reminds us playfully that this revolution is relative: modern for the Catholic church is still decades behind.

The subtle humour is what makes this story so endearing, and a delightfully clever screenplay from Anthony McCarten is cashed in for comic gold in one of the most stunningly acted films of the year. The tone is not overly sentimental, Meirelle finding the perfect balance between the naturalistic and cinematic. He flicks from grainy newsreel footage to colourful street art, from shaky handheld to extreme closeups. Monochrome flashbacks delve into Jorge’s shady past, proving that change is possible and uncovering an element of darkness which we might expect from the co-director of City of God – though this is where the similarities end, for the film treads lightly over the abuse scandal that still rocks the Catholic church, leading to an overly cosy end.

This is an enchanting film that reduces two religious figureheads from untouchable icons to two elderly men, flawed and fundamentally human, testing the limits of faith and forgiveness and championing progress – however gradual that may be.

The Two Popes is available on Netflix from December 2019.

Watch the trailer for The Two Popes here: