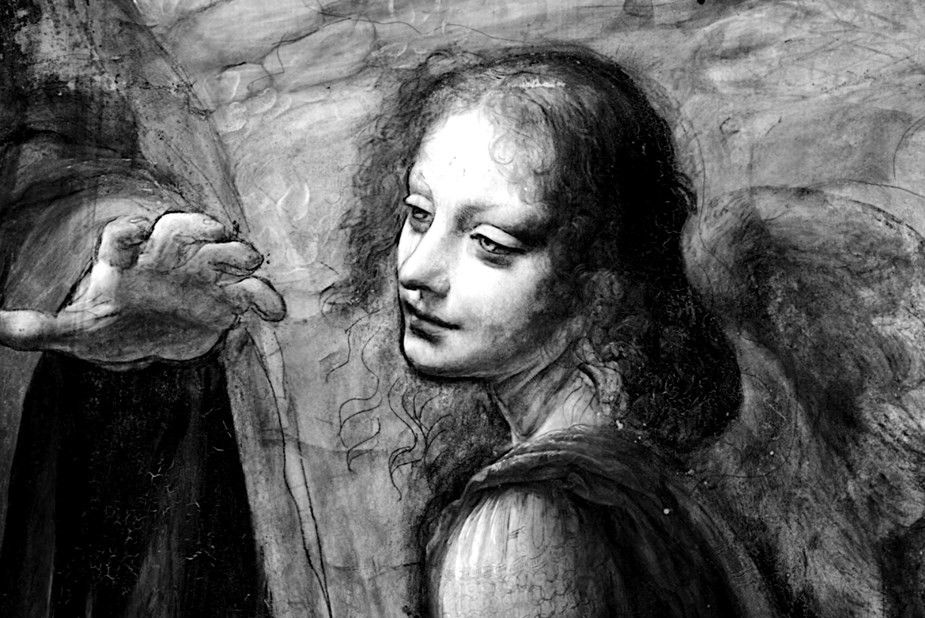 Leonardo: Experience a Masterpiece at the National Gallery | Exhibition review

The woman casts her eyes down, her left hand stretched forwards, her right clasping the shoulders of a young boy. A naked child sits on the flowered turf, raising his fingers in blessing. They’re watched over by an angel, wings poised. Light from an unseen source illuminates the pale faces of the group, the contours of their cheeks cast in shadow. They sit against a background of primal rocks and water, as if in a cave at the world’s beginning.

Leonardo da Vinci’s The Madonna of the Rocks is one of the best-known works of art in the world, partly due to the famous debate between the Louvre and the National Gallery over which of the two versions in existence is the “prime version” (it’s now generally agreed to be the one in the Louvre). Even if it’s not the “original”, the National Gallery painting is stunningly beautiful, a true masterpiece. Da Vinci’s skill can be seen in the luminous quality of the skin, the foreshortening of the Virgin’s hand, the strangeness of the dramatic setting.

Now this painting is the star of a new, digitally enhanced exhibition at the National Gallery. Spread across several dramatically lit rooms, this “experience” features a mocked-up artist’s studio, containing a fancy video that reveals the underdrawings, sketches and paint layers that lie behind the painting. There’s also a room of illuminated objects where viewers can experiment with light and shadow, and a digital projection about the chapel for which the painting was commissioned.

Finally, viewers come face-to-face with the painting itself, presented in the context of a digital recreation of its original chapel setting. The light and surroundings change slowly, encouraging the viewer to stay and look for a while.

It’s all quite interesting. But, fundamentally, it seems a bit pointless. The digital aspects of the “experience” give some useful information, and kids will probably enjoy playing around with the lighting of the different objects. But with ticket prices ranging from £16-£20, it seems a bit cheeky to ask visitors to pay through the nose to see a painting that usually hangs on the wall of the free-to-visit collection, with a few added digital extras.

Featured Image: Detail from an infrared reflectogram of Leonardo da Vinci, The Virgin of the Rocks, c.1491-1508

Leonardo: Experience a Masterpiece is at the National Gallery from 9th November until 12th January 2020. For further information visit the exhibition’s website here.

Watch the trailer for Leonardo: Experience a Masterpiece here: