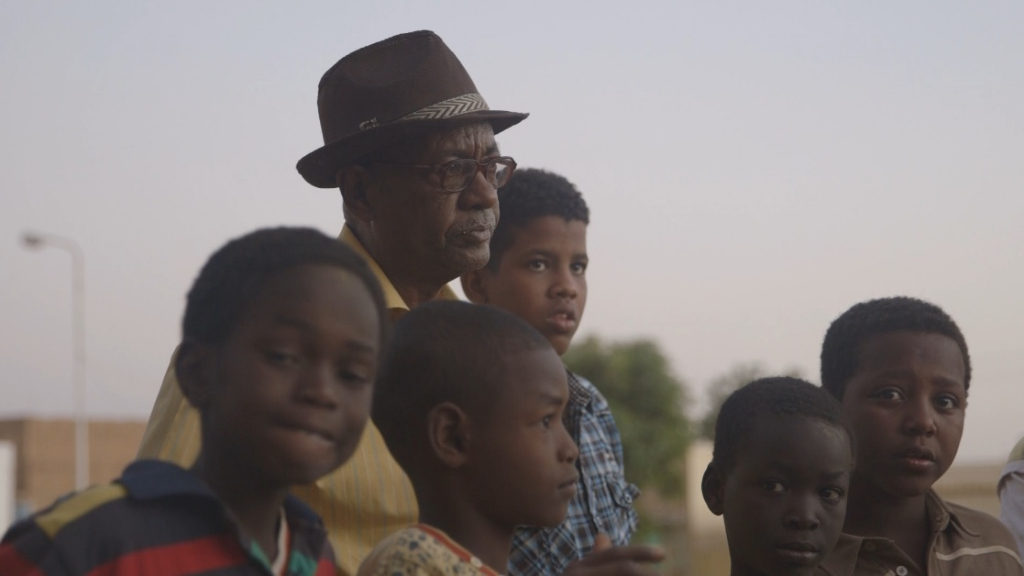 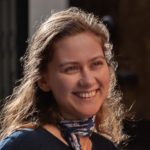 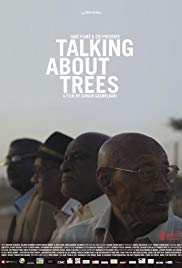 Talking About Trees is deeply nostalgic, finely tiptoeing the line between mourning and uplift for both its subjects and viewers. This documentary seeks an answer to the question: who, or what, killed Sudanese cinema?

The film follows the members of the Sudanese Film Group – Ibrahim Shaddad, Suleiman Ibrahim, Eltayeb Mahdi, Manar Al-Hilo, and Hana Abdelrahman Suliman – as they attempt to restore a defunct open-air cinema without government or private funding. The film playfully grants its subjects agency over the way they tell their story. As they embark on the difficult process of reinstating the cinema, they also reenact beloved scenes from famous films and recall their favourite quotes from filmmakers they admire. They play Hollywood starlets and auteurs, or hold their hands up in the air as if peering through a lens. The documentary also intersperses clips from the subjects’ own films, which have been long forgotten in a country that refuses to cultivate their creative freedom.

The political aspect of this film plays out in the not-so-distant background. As the men busy themselves with reestablishing the theatre, they sometimes speak of the 1989 coup and revolutions as a thing of the past while noting the ways in which these politics seep into their present. The men surround themselves in all things cinema, creating a world in which external events creep in to gnaw at the edges of their rose-tinted daydreams. Their film archive becomes a place of both creative refuge and self-imposed exile.

The film’s narrative is not always clear, as if the subjects’ passion has projected a dreaminess over the entire documentary. Director Suhaib Gasmelbari crafts beautiful images that provoke shared reminiscence of a golden age of cinema and also highlight the palpable love and care with which these filmmakers approach their craft. It’s not just sentimentality that comes through the screen, but a view of the world around them as a distinctly beautiful place fertile for the creation of new worlds.

In the end, the film does not reach the point of the 2019 revolution, which raises the question of how last year’s events affected the men’s efforts to restore the cinema for the people. The documentary wraps up on a suspended sense of hope, refusing to surrender to pure failure.

Talking About Trees is released in select cinemas on 31st January 2020.

Watch a clip from Talking About Trees here: