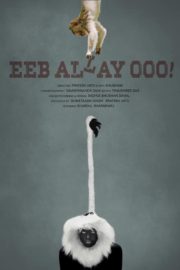 Eeb Allay Ooo!’s cryptic title is handily explained in the opening frames of director Prateek Vats’s assured narrative feature debut. It’s not gibberish, nor the result of a writer falling asleep with their head on the keyboard, but is the rallying cry of New Delhi’s professional monkey deterrent force, tasked with the job of keeping the incessantly perseverant local rhesus monkey population away from government buildings in the heart of the Indian capital. “Eeb allay ooo” mimics the sounds of the langur (a natural enemy of the rhesus) and is intended to send the primates fleeing in fright. In theory, anyway.

Anjani (Shardul Bhardwaj) manages to land a job as a monkey scarer, despite his lack of qualifications or any real aptitude for the work. The idea that animals are more scared of us than we are of them is not an accurate summation of Anjani’s initial efforts. It’s a demoralising predicament. Anjani is unsuited to his work, but with his lack of education or tangible, marketable skills, it’s not as though he can simply pivot to a new career of his choosing. The no-win circumstances of Adjani’s existence are used to paint a portrait of a man who has been trapped by limited means and limited prospects, which he is expected to be grateful for.

This is a nimble film with a coherent and inescapable subtext, although admittedly, Eeb Allay Ooo! could still be enjoyed on a superficial level. It’s an ideological dissection of a class division that has marginalised many underprivileged Indians – an issue that has clearly afflicted many (or rather, most) countries and cultures. Though worthy, the film is not weighty; it’s essentially a topical allegory in the guise of a breezy comedy. As Anjani, Bhardwaj is sympathetic in the extreme, even when Vats’s dextrous storytelling nudges the film towards an almost dreamlike social realism. It’s charmingly amusing throughout.

Eeb Allay Ooo! does not have a UK release date yet.