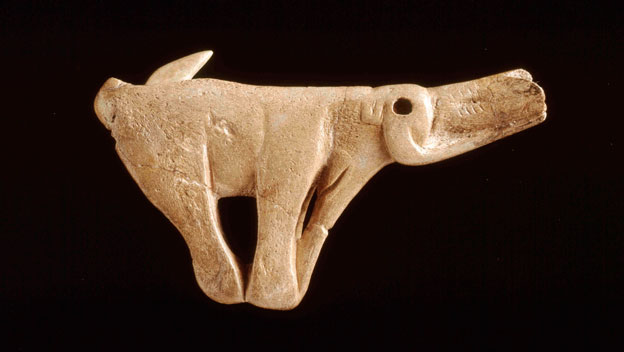 The Ice Age art currently on display at the British Museum was created between 10,000 and 40,000 years ago and consists of the oldest known examples of human and animal figures. The museum has mounted an exhibition of a stunning selection of portable pieces, made for a nomadic life, many designed to be hung around the neck and many so small it’s a wonder that they were ever made. Some were fired out of clay, others carved into mammoth and reindeer ivory and bone, ingeniously constructed to take advantage of the natural shape of the material from which they were created The exhibition lights these objects in ways that reveal the shadows they would have cast inside dimly lit caves and tents, aiming to transport us back to darker times. However, the curators also want us to view these pieces as modern art objects and encourage us to draw comparisons with the likes of Matisse and Henry Moore, by including their drawings and sculptures alongside the Ice Age exhibits.

Throughout the exhibition depictions of women dominate, demonstrating the characteristics of women at all stages of their reproductive life. Many, it is speculated, were talismanic, some even deliberately smashed, perhaps because they failed to fulfil their purpose. A female figure found in Italy and dating back some 20,000 years ago depicts the body of a woman who has had children. Her low slung breasts, ample thighs and sagging stomach are exaggerated to make this point. Some figures are so abstracted that they show little more than buttocks or breasts on what is otherwise a stick of bone. A cleverly designed spear thrower in the shape of a mammoth illustrates how practical items were prized and decorated, and one flint spear head, too large and fragile for use, seems to have been lovingly created for the sake of demonstrating the artist’s skill.

For the curators of Ice Age Art, these early artistic endeavours “demonstrate the arrival of people with our complex modern brain”. We’re not sure biologists would agree – modern humans existed in Africa many tens of thousands of years before the last Ice Age. In terms of art history, however, these really are the oldest surviving examples of representations of any kind, let alone abstraction and symbolism. For that reason this exhibition is truly remarkable, serving a desire to feel a connection with our past as early into our existence as possible.

Ice Age Art – The Arrival of the Modern Mind is at the British Museum until 26th May 2013. For further information, click here. 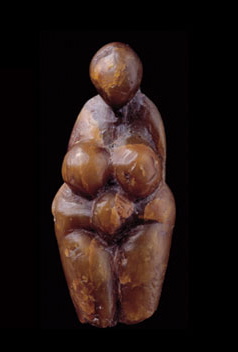