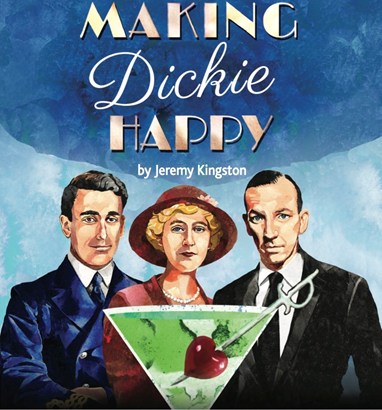 At the Tristan Bates Theatre near Covent Garden, a curious play is about to be staged; a play that explores a fictional meeting between a group of real-life characters at a Devonshire hotel in the wake of World War I. The protagonists of this fabrication are Noel Coward (played with all the requisite charm, class and drollery by Phineas Pett), on holiday was his lover, Tono (David Alderman). They are joined by Agatha Christie (the right degree of mousey, juxtaposed with the wickedly sharp mind of the preeminent novelist, skillfully attained by Helen Duff), who is under a short-lived pseudonym at the hotel for mysterious reasons. “Dickie” Mountbatten (James Phelip), a dethroned prince, completes the set, and they all find themselves at this elaborate hotel.

The cocktails flow (provided by Rob Pomfret’s dishy waiter), tensions rise and allegations fly from the word go. Agatha is approached by Dickie, who has an ingenious plan for murder, which he is willing to give to the apparently reluctant author free of charge. The plan disturbs her, but when she confides in Mr Coward he responds with counter-suspicion, jovial ribbing and the occasional dirty poem. This sets the play up for a masterful tête-a-tête between the two wordsmiths. The writing by Jeremy Kingston is a joy to witness, with scorchingly fast repartee and put-downs sending the audience into fits of laughter again and again. Mr Prett clearly loves playing the distinguished dramatist, with lines Coward himself would have had a ball performing.

The sanctimonious naval officer Dickie is relentlessly tormented by Coward, to the amusement of the spectators. There is real joy and energy among the cast, who take the material and the direction from Robert Gillespie and run with it.

Ostensibly a story of marital deceit, infatuation, war and the true meaning of love, the heavy stuff is pushed aside as soon as it rears its head in favour of comedy. Perhaps this is what the playwright aims for: when discourse or analysis unearths something ugly, people of this persuasion – authors, dramaturges and ex-princes – push it under the rug and chant an obscene limerick. As a lighthearted look at the chance imaginary meeting between two great writers, this is a delightful, loquacious romp and no doubt thoroughly enjoyed by fans of both the principle characters.

Making Dickie Happy is on at Tristan Bates Theatre until 30th March 2013, for further information or to book, visit here.