Violence between Muslims and Buddhists erupts in Burma 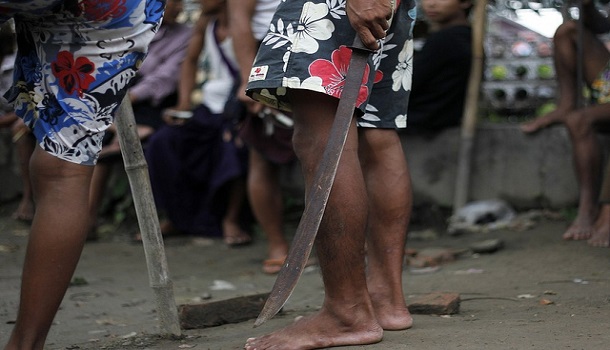 Violence between Muslims and Buddhists erupts in Burma

Ethnic tension between Muslims and Buddhists has spilled over into mob violence on the streets of Burma’s central city of Meikhtila – 540km north of Yangon – resulting in the death of civilians and the displacement of thousands. Three days ago, violence erupted from simmering ethnic tension when mobs armed with swords and sticks engaged in brutal skirmishes on the streets of Meikhtila, Wundwin, Mahlaing and Thazi. According to the Burmese state television network, 31 people have been killed and 152 houses and 13 religious buildings burnt and looted.

Scores of Muslims have been left homeless as temporary relief camps have been erected to shelter many of those who tried to flee the violence, whilst many are still being evacuated under police protection through taunting crowds.

Whilst President Thein Sein declared an indefinite state of emergency in the Mandalay region on 22nd March, it still remains unclear regarding the catalyst for the burst of ethnic killing – local sources have pointed to an argument in a gold shop between a Buddhist couple and the Muslim proprietor.

Communal violence and identity conflict is not a new phenomenon in Burma. Indeed, Burma, also known as Myanmar, is one of the most ethnically diverse states in Asia and has recently seen an increase in ethnic violence since the end of the 49-year-long military dictatorship and subsequent reform that began in March 2011. The Asian Human Rights commission has stated that Burmese authorities would be “disingenuous to describe the violence as unexpected”.

Last year around 110 people were killed and 120,000 were left homeless when violence erupted in Western Burma, as stateless Rohingya Muslims were targeted. Furthermore, in the latter part of 2012 the government allowed public demonstrations calling for the expulsion of Muslims in the west of the country who were reputed to have entered the country illegally. Even at this time, these prejudiced displays resulted in repeated reprise attacks of communal violence. In a country of 60 million, wherein only 5% of the population is Muslim, many groups have warned against the tensions that could spill over into genocide.

Many critics have debated why the government was slow in sending in the army and why the situation has escalated out of control so quickly. In a country that recently emerged from a brutal dictatorship, however, the deployment of troops on the streets is still seen as a controversial and painful vestige of an era that many want to move on from.

Kicking it 90’s style with Lazy Oaf
Patrick Robinson to launch his own label, Pashko