Narrative at the Royal Court Theatre 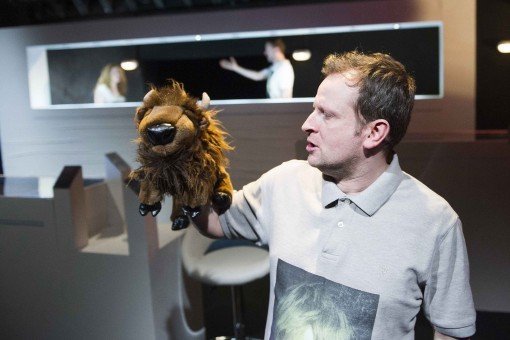 Narrative, the latest piece by writer-director Anthony Neilson, examines and deconstructs the term that gives the work its title. The interrogation, it turns out, unearths more problems than it solves, and the play never shies away from the messiness of its subject. Neilson’s play is a multimedia production incorporating song, music and video. In an arresting opening, a faux-documentary film screens against the wall. It recounts the story of perhaps the earliest existing narrative: a cave painting in France depicting a bison mauling a man. But where does this story begin and end? And is the painting really so clear, so transparent, so absolutely set in stone as it seems? From the outset, Narrative considers the problem of narrative: the limitations of both linear storytelling and a hard-and-fast linear outlook on life. Neilson explores this through the clashing, bizarre conversations and relationships between his characters – seven contemporary Londoners attempting to make sense of their lives and the lives of others. And the bison from the cave painting sticks around too.

While fixed and defined narratives are what the characters long to apply to their lives, Neilson provides the audience with a decidedly different angle. For example, just as we become engrossed in the very funny tale of “an arsehole,” the stage soon becomes flooded with other characters, with their own baggage of tales and experiences. It becomes a cacophony of voices and perspectives. The story we thought we were in explodes and expands; it becomes interlocked with other stories. The muddle is what Neilson asks us to work through.

More than its sometimes overwrought analysis of performance and narrative, what is captivating about Neilson’s play is its sense of humour, which underlies even its greatest tragedies. The personal breakdowns of Zawe Ashton’s and Imogen Doel’s characters, Christine Entwistle’s character mourning for the son she lost to suicide – these moments manage to be insuppressibly funny. It is these playful instances that truly bring the work to life. Neilson is most successful when he asks us not just to think abstractly or conceptually, but to react emotionally, and pronto.

Narrative is on in the Jerwood Theatre Upstairs at the Royal Court until 4th May 2013. For further information or to book visit here.