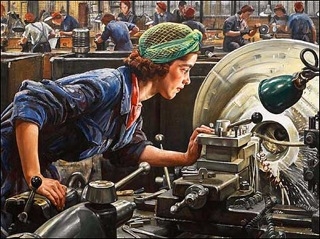 Dame Laura Knight (1877 – 1970) is remembered as one of Britain’s most influential 20th century impressionist painters. She was made a Dame in 1929 and became the first full female member of the Royal Academy of Arts in 1936, 168 years after its foundation in 1768 (although founding members included two women). The show at the National Portrait Gallery is the first major exhibition dedicated to her portraits, with over 40 works of art on display. Her level of skill with a brush is instantly apparent. The show chiefly consists of oil paintings, but they present a far smoother consistency than is often apparent in oil works, appropriately demonstrating her talent. There is phenomenal attention to detail in almost every piece, even with the “accelerated” techniques employed when painting in gypsy communities. Old Gypsy Woman is a good example of this. There is such depth and accuracy in the facial expressions that it is hard to believe it is the work of a paintbrush at times.

A section of the exhibition covers her work during World War II for the War Artists Advisory Board. A selection of portraits includes depictions of female figures hard at work with machinery, intended to attract further female recruits with Ruby Loftus Screwing a Breech-Ring, painted in 1942. The familiar blue overall wearing woman is a high definition precursor to the iconic, and perhaps more commonly known American We Can Do It! poster produced by J Howard Miller in 1943.

The Nuremburg Trial (1946) depicts a ruined landscape stretching away into the environment surrounding several rows of court benches, filled with suited men, all watched over by uniformed soldiers standing at the back. The painting is strikingly sombre in contrast with the more glamorous tone of the propaganda pieces.

Spending time surrounded by walls lined with painting upon painting of people staring back at you isn’t everyone’s ideal exhibition. Regardless, this show is worth a good look. It showcases some serious talent, even considering what you’d expect from a high profile organisation like the National Portrait Gallery. You cannot help but be impressed by Dame Laura Knight’s portraits.

Laura Knight Portraits is at the National Portrait Gallery from the 11th July until 13th October 2013, for further information visit here.