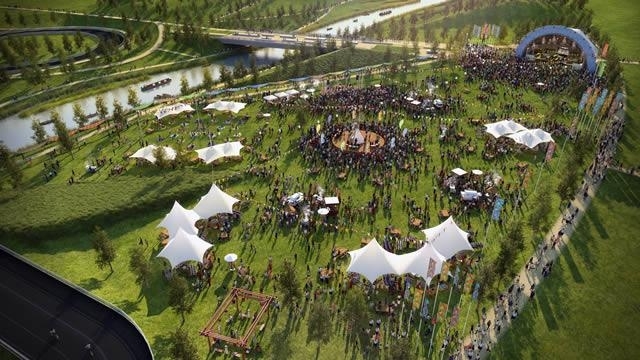 2012 was truly a sobering year to be a Londoner, with the Olympic games at the centre of a truly London-centric 12 months. More than ever the city felt to be at the centre of the world’s collective attention, and it’s hard now to believe that a year has already passed since the opening ceremony. Alongside three days of athletics, the anniversary was marked by two days of music, performance, food, drink and general festivities across Stratford’s triumphant Queen Elizabeth Park.

Although – like almost all festivals of any kind – the music was most certainly at the heart of the entire event, the quality and quantity of other events around the park were of uncharacteristically high-note. Punters were greeted upon entering by the confounding figure of one of the National Theatre’s prized War Horse puppets, eerily life-like and jaw-dropping for both young and old.

Variety was the central theme of the day, and the rather extensive bazaar and food festival was testament to this, with everything from Norwegian smoked salmon wraps to Osaka takoyaki (a ball-shaped Japanese fried snack) available. Also of note were the almost full-scale bouncy castle of Stonehenge and Spiegel World, a charming makeshift building housing dozens of swing-dance, clowning, cabaret, and similar workshops and competitions over the course of the day.

The programme of music was an almost perfect selection. The Olympics is as much about global diversity as it is about highlighting and developing a host nation. The former was put to work on the main stage (hosted by the Barbican Centre) and the latter on the secondary stage. Seun Kuti – son of Afrobeat pioneer, Fela Kuti – took to the Barbican Stage with his father’s own Egypt 80 for a set of typically showy and joyous Afrobeat jams. Though obviously not truly “original”, Seun Kuti very ably channelled the family spirit, and what could be more fitting to an Olympic celebration than the Afrobeat message of unity, dance and international brotherhood? Colombians Bomba Esteréreo were another striking highlight earlier in the day, heartening the crowd with grooves and beats too tempting to ignore. The group’s set list is simply stellar and its sound impeccable for an audience like that which was present: clever, diverse and great for dancing. Bomba Esteréo’s unique take on cumbia (a popular Colombian music form) and psychedelic pop takes as many cues from Nigeria and Panama as it does from England or America. Furthermore, singer Liliana Saumet was the single most powerful performer on the stage all day, utilising her uncanny likability and charisma to great effect in wooing the audience, all the while never saying more than three words in English: “Thank you London!”

The crowning moment was arguably the set from U-Roy and his all-Jamaican band. Toots & the Maytals had originally been set to appear at the festival, but were forced to pull out due to one of the members suffering a head injury. Luckily, their presence was barely missed as reggae soul was swapped for dub rhythms peppered by The Originator himself. Now in his 70s, U-Roy remains able to “toast” (essentially rapping in reggae terms) and head up a show like few could. There’s clearly something in the simplicity and choruses of much Jamaican pop music, inherent since before U-Roy joined the scene in the 60s, which encourages an indescribably positive atmosphere. But the sight of thousands of diverse Londoners bonding over a good old dance and a skank was especially uplifting on this occasion.

The secondary stage (Caught by the River), whether accidentally or not, felt like the British stage. Beside the Beer & Ale festival, it housed sets from post-punk originators Wire, as well as Viv Albertine from The Slits. Wire’s ability to thrill with brand new songs after four decades was a striking reminder of just how innovative Britons can be.

Just like the Olympics, the beer and food were far too expensive, and there was certainly no chance of seeing everything. But in the same fashion as the Olympics, it left you with a feeling of community and an appreciation for diversity’s sheer positive value. The most well-planned and realised event of its kind in living memory – at less than £10 for a ticket! If only all festivals were like this.