Eldorado at the Arcola 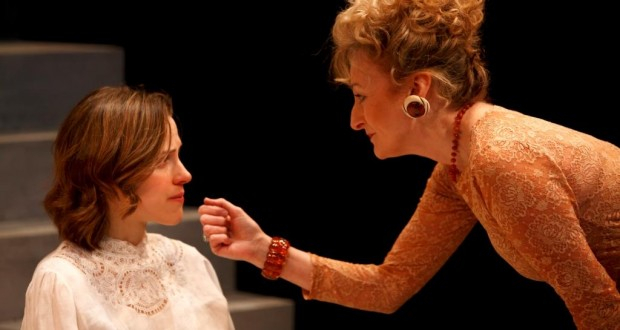 Eldorado at the Arcola | Theatre review

Debuting in the UK at the Arcola Theatre, Marius von Mayenburg’s 2004 play Eldorado tells the story of a young, married and soon-to-be-father estate agent, teetering on the brink of self-destruction. Ironically referencing the mythical city El Dorado, the play is a parable about human corruption and its diachronic impact on the world. Emotional destitution, recurrent allusion to money and the permanently caustic tone together convey human degradation. The maternal lineage between Greta, Thekla and the unborn daughter represent the past, present and future, creating universality of time. Lexically-familiar Iraqi War-esque warzone reportage combined with sales-infused descriptions of archaeological sites create universality of place that is neither western nor South American, nor even Middle Eastern. Repetitious references to sea creatures add to the cyclical aspect of the play, creating a sense that humanity is swimming around in a fishbowl-like structure, with history endlessly repeating itself.

There is little textual evidence to indicate that the play has been translated; Maja Zade’s rendering of the German original acutely captures the bleakly cynical tone of bourgeois Englishmen in despair. Traces of its Germanic origins can be felt, however, in the play’s allegorical resonance through which its tone is relentlessly moralising. As a result, the spectator is forced to continually think about the various strands, motifs and metaphors and how to assemble these together so as to produce a cohesive way of enjoying the performance. In a sense, the play is almost too clever to be fully enjoyed at the philosophical level von Mayenburg perhaps intended, with the spectator’s enjoyment instead sustained by the play’s tangible qualities, which are not wanting.

Eldorado is entertainingly subversive. Its witty dialogue unfailingly amuses through piercingly acerbic lines such as “your left hand is a disaster, and I mean well” and “you’re just in my head and you haven’t even got a plate”. These are delivered through superior performances by a talented ensemble, with each actor an embodiment of some form of mental instability, together forming a harmonious interweaving of human vices. Sian Thomas is particularly impressive in her interpretation of Greta, a drunk, greedy and anti-maternal woman who dominates the stage with her high heels and manners of seduction. The monolithic stage setting obscures all contextual references to time and place, leaving the spectator suspended, like a goldfish perhaps, in the inferno of capitalism and corruption.

Eldorado is on at the Arcola Theatre until 3rd May 2014, for further information or to book visit here.

Watch the trailer for Eldorado here: