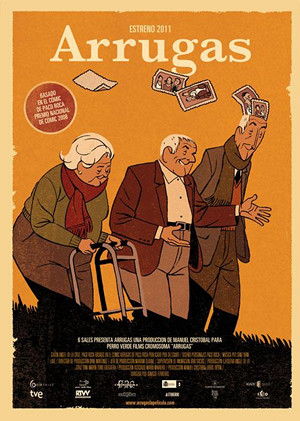 Adapted from the graphic novel Arrugas by Paco Roca, this Spanish animation has been redubbed into English as Wrinkles. It follows Emilio (Martin Sheen) as he moves into an old people’s home, forges a precarious friendship with roommate Miguel and slowly falls victim to worsening Alzheimer’s. Despite moving and depressing subject matter, Wrinkles joins the ranks of films, like Belleville Rendezvous and Persepolis, that achieve something powerful in an animated form – proving that animation is not just for children.

In fact, as a medium, it allows for some slippage in the representation of reality that can have strong emotive effects – one of the residents of the care home lives in a constant state of thinking that she’s on the Orient Express to Istanbul, and so the Orient Express is what we see. Similarly, as Emilio’s grip on reality and the present starts to slip we are always in his mind and slipping with him, following him as he thinks he is living in his younger, surer days.

There are recognisable debts to the classic odd couple setup, to prison dramas and the familiar contrast of the innocent newcomer against the jaded cynic: Emilio is taken aback by the advanced stages that some of the patients are at, but Miguel uses their helplessness to fleece them for money. Wrinkles manages to find plenty of humour in such a devastating topic, often arriving at moments that are simultaneously funny and poignant.

As well as an admirable attention to detail, that good animation needs anyway, what is really striking is the symbolic reflection of the film’s themes in the animation style. Shadows, shades of dark and light give the film a distinctive look, and highlight the contrast in Alzheimer’s sufferers between more lucid moments and the moments spent in darkness.

What Wrinkles shows very effectively is the distressing dichotomy of these old people who chat in a civilized way at dinner and keep semblances of their dignity as much as they can, yet they cannot wash themselves or feed themselves or, at worst, remember who they are. In watching the other residents nap and dribble and queue up to be assisted into their beds Emilio is seeing versions of his future, which are grotesque and real despite the very artificial medium of animation. It’s a film that, like all of us, is leading towards one sad, inevitable end. A touching, honest and amusing watch, it is also a grim memento mori and reminder of the many futilities of life. If the best you have is memories, what happens when they start to fade?

Wrinkles is on limited release from 18th April 2014.

Watch the trailer for Wrinkles here: