Tauba Auerbach and David Robilliard exhibitions at the ICA 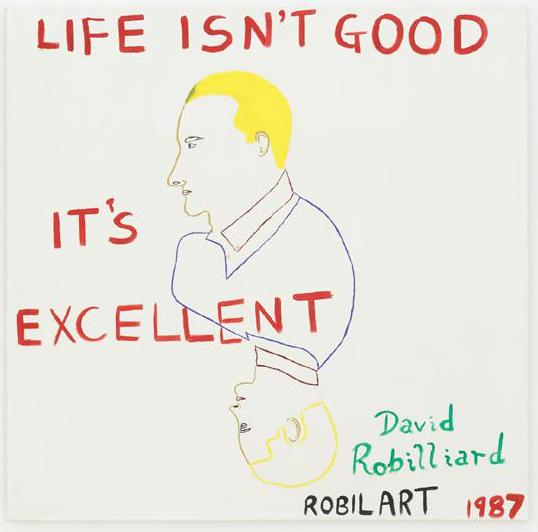 Tauba Auerbach’s work is to do with the fourth dimension. Auerbach has done it, or hinted at it in sculpture, with majestic looking interlocking helixes (she is also concerned with the double helix of DNA), which represent the natural laws of symmetry that underlie the universe. The helixes are complicated looking things: one can at least marvel at the technical intricacy of the pieces and wonder just how they are made. Apparently human beings perceive in 3D thanks to light. Without light to round things out we have only silhouette, so a sphere might look like a circle getting bigger or smaller or moving closer or farther away. (Disclaimer: the physical arguments expressed on this article are of the author named, not of the artist.) This makes some of her pieces more interesting – Auerbach’s undulating tubes can be read spatially in one of two ways. From an awkward perspective (the fourth dimension being nothing but) resolve themselves into a network of squares and blobs, and, reflected, make no sense at all, or at least contradict everything one has already seen. One must admire her visual wit and technique, even if the ends go over one’s head.  Her work is unpretentious and formally exquisite.

Also on display at the ICA is the work of the late writer and painter David Robilliard, who as a poet is elegant and catty, if not quite believable, and as a painter exposes the far more famous David Shrigley as something of a rip off man. There is something annoyingly pseudo-comedianish and ingratiating about his work though, and if his figural talent does not outlast his slogans in the long run, he may well become a period piece.