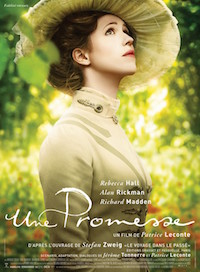 A Promise is an adaptation of Sefan Zweig’s novel Journey into the Past (Widerstand der Wirklichkeit). The picture tells a complicated love story that faces the challenge of time and distance separation in the Germany of the early 20th century. Friedrich, a graduate of humble origins (Richard Madden), takes up a clerical post in a steel factory. Impressed by his work, the elderly owner Karl (Alan Rickman) takes him on as his private secretary. Karl is confined to his home, due to his declining health, and the young man moves in to continue his work. There he meets the owner’s wife, Lotte (Rebecca Hall), a much younger woman, beautiful and reserved.

As time passes Friedrich falls passionately in love with Lotte but does not dare reveal his feelings. A romantic intrigue develops in this stifling bourgeois home, all looks and silences, without a single word or gesture of love.

French director Patrice Leconte adapted the story and for the first time makes a movie in English. A Promise is a classic romance enriched by modern camera movements – Leconte himself is the camera operator, one of very few directors to do so. With his oblique approach to direction, he gives a contemporary interpretation to very classic characters.

Even though the script tends to be dull at times, and uneventful, the strong acting and direction make it worth watching till the end.

A Promise is released nationwide on 1st August 2014 and on VOD on 4th August.