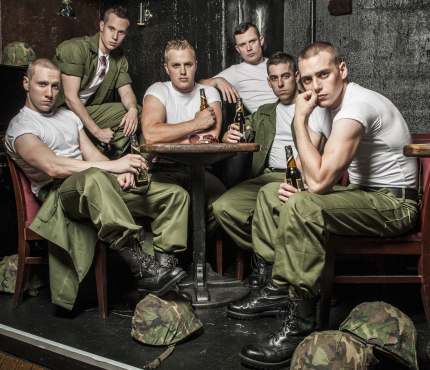 Tarento Productions does it again – brings a storming, relevant, fresh piece of theatre to the Southwark Playhouse dotted with electrifying new talent and edge. This time, after the success of the Titanic musical last year, is European premiere of musical Dogfight. Set in 1963, the night before a group of young marines are deployed to Vietnam, we meet the three Bs – Eddie Birdlace (Jamie Muscato), Boland (Cellen Chugg Jones) and Bernstein (Nicholas Corre): a trio of friends who take part in a final night of debauchery by bringing the ugliest girl they can find to the party to win a pot of money. Corre’s virginal Bernstein stirs an empathy in his enthusiasm and naivety in his final jumps to manhood. Chugg Jones’ Boland is aggressive and hungry, and his energy as a performer informs the pressure to conform for the other lads.

Muscato’s Birdlace is terrific, what a journey this character has, and Muscato eloquently finds his strength in every step. The chemistry developed on stage with the most sensational debut performance from leading female Rose (Laura Jane Matthewson) is heart-warming and -breaking all at once. Matthewson’s accomplished vocal and lyrical grace swells on stage with sensitivity and elegance.

Fluid choreography and apt direction from Lucie Pankhurst and Matt Ryan ensures the show weaves without a blip. Musical director George Dyer has hosted a band that play with the show, rather than for it and this is soothingly complementary and charming. The ensemble are just exquisite, with some lovely moments from Emily Olive Boyd and Joshua Dowen particularly.

Despite some muffled sound with dialogue in some places of play, assuming this is just a technical hitch, just serves as a reminder that this is live theatre and the fact that this ensemble has come together and created such power and truth is a testimony to the entire team. The second act feels that it could be fleshed out a little writing-wise, particularly when we see the Marines in Vietnam, but this is minor – Benj Pasek and Justin Paul’s music and lyrics are nothing short of beautiful and Peter Duchan’s script is littered with charm, hope, bite, humour and heartbreak all at the appropriate intervals. A true triumph.

Dogfight is on at Southwark Playhouse until 13th September 2014, for further information or to book visit here.