London Tales at the Lost 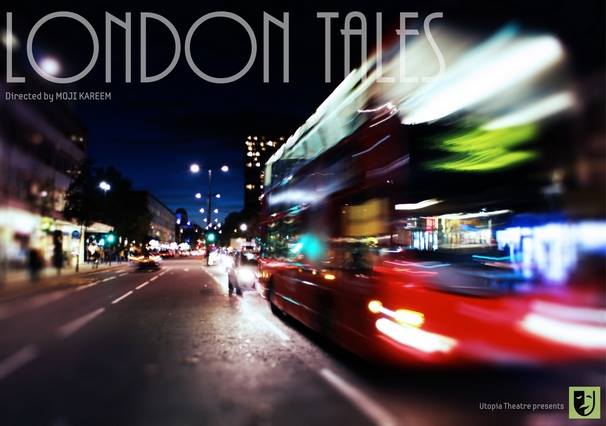 “London is a very strange place,” we are told in London Tales, “it’s a place full of puffy eyed, flabby faced, well-dressed primates”. It’s a place of walking and talking “skeletons”. Moji Kareem’s production is a series of linked stories that are sporadically interrupted by personal dialogue, which aims to question modern life. Who were we? What have we become? Where are we going? These are questions that Kareem only half answers in her direction of London Tales, as it explores the present but never invokes a dialogue about the future.

The cast are undoubtedly effective in re-creating the archetypal Londoner on the tube. The audience laugh in recognition as the familiar faces of the commuter are easily identified. There is the woman (Emily Swatton) applying her make-up and the man (Dannie Pye) desperately trying to read the Metro over the shoulder of a fellow passenger. As the characters begin to argue about who should say sorry over a trivial incident, the dramaturgical element of sound is used to dramatise the internal conflicts that lie at the heart of the production. Voices lack any form of expression or emotion as they blur together. The words are continuously repeated, reflecting the monotonous ritual of commuting. London Tales suggests that the nature of the city has dehumanised us, merely turning us into a community of ruined bodies and broken hearts. Each character declares that they will not allow their humanity to be numb. We are all fragile.

Yet, by lacking a clear narrative structure the production doesn’t quite manage to form the connection it wishes to with the audience. Devices, such as personal monologues, are utilised to evoke an emotional response but, though comedic and interesting, they are over too quickly to achieve one. Sadly, the transitions between the stories are, at times, clumsy and this affects the understanding of events on stage. The need to strip the characters of any defining features in order to hold up a mirror to the robotic nature of commuting and working in London prevents London Tales from exploring in depth the questions it touches upon. Ultimately, it fails to have the profound effect it so clearly desires. We are a given a snapshot of present life but not an analysis of what this means for Londoners in the near future.

London Tales is on at Lost Theatre until 17th January 2015, for more information or to book visit here.