Hayseed Dixie – Hair Down to My Grass 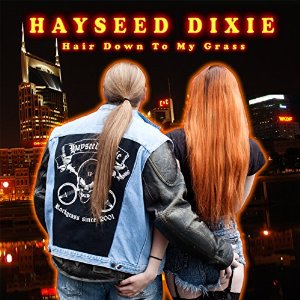 Hayseed Dixie – Hair Down to My Grass | Album review

Hair Down to My Grass

Eye of the Tiger, Dude Looks Like a Lady

Hayseed Dixie formed in 2001 with the release of their debut album, A Hillbilly Tribute to AC/DC, in which they invented their own genre: “rockgrass”, a mixture of hard rock and bluegrass. The band consists of singer John Wheeler aka Scotch Barley, Johnny Butten on banjo duty, Hippy Joe Hymas Legend has it that the band hails from Deer Lick Holler in Appalachia and were allegedly introduced to the work of AC/DC when a luckless stranger fatally crashed his car, full of the hard rockers’ albums, in their town. Hair Down to My Grass is their thirteenth studio album, following on from Grasswhoopin’ Party Pack, Vol. 2, which features the seminal example of a hillbilly rendition of a West Coast rap classic (probably the only example) in Gin and Juice.

This album is as silly and fun as their choice of previous covers might suggest. Eschewing their own original sartorial material, this album is all covers. From the expected Summer of 69, Don’t Stop Believin’ and Livin’ On A Prayer, to the more unusual and occasionally inspired Dude Looks Like a Lady, Eye of the Tiger and Pink Floyd’s Comfortably Numb. It closes with the band in pensive mood on Don’t Fear the Reaper.

The Deep South of America is a mysterious place – the tougher the man is, the longer the hair. Southerners seem rawer and wilder than their more urbane coastal counterparts. This album is so evocative of that arcane culture you can almost feel the bluegrass beneath your feet and moonshine burning your oesophagus. You could imagine the elusive “Dixie Mafia” of Justified getting down to this when they take a break from their nefarious duties or Ronnie and Bobby of Lizard Lick Towing maintaining their Texan girth by getting their BBQ on to the insatiable strains of hillbilly fiddle. There is beauty in that fiddle at times – the playing is assured bordering on virtuoso and the vocals are entertaining. There is a charm to the album – like musical candyfloss it is fun but insubstantial.

Hayseed Dixie may be a niche novelty act with a limited appeal for sophisticated Londoners but there is an irresistible call to hoedown when the manic fiddle starts up.

Hair Down to My Grass was released on 12th January 2015, for further information or to order the album visit here.

Hair Down to My Grass

Eye of the Tiger, Dude Looks Like a Lady