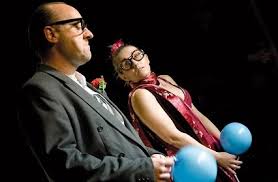 As Three Dog Night’s One Is the Loneliest Number begins to play, we are introduced to the bespectacled Andrew (Will Travis) and Angela (Susan Mcardle), anxiously creating online dating profiles. The two, sitting side by side, agonise over their own self-description, which rapidly begins to be influenced by the recalled words of their best friends. “Carol says” and “Gary says” transfigures into “be Carol” and “be Gary” as they falsify their physical appearances for the first date.

Developed from the 15-minute JB Shorts production of Blind Date and its sequel, this full-length play that reunites writer Dave Simpson and director Alice Bartlett, narrates the stages of a relationship forced apart by situation but continuously brought back together through coincidence.

Travis’ and Mcardle’s superb characterisation of two misfits who are desperately searching for the “perfect partner” oscillates between the poignant and the comedic. It is Blind Date’s exploration of idealisation and perfection associated with love that is most affecting. Andrew and Angela’s need to attain the unattainable blinds them from the truth. Instead, they are obsessed by image. Simpson’s script expertly weaves these ideas in underneath the humour. As Travis and Mcardle get dressed for the first date, they grotesquely strip to Freddie Mercury’s The Great Pretender. The constant references to television programmes not only provide a common interest between the two, but works as a signifier to the fantastical images that threaten to consume them.

The supporting characters, Drew Cain and Verity-May Henry, switch between friends, neighbours and waiters with effortless ease. The scene changes, mostly created by a few objects, are almost an act in themselves as Cain and Henry retain their role even when bringing on props. At times, the constant barrage of jokes can feel repetitive, but there are too many moments of genuine hilarity, particularly from Travis, for this to be a problem.

Even the predictability and saccharine denouement of Blind Date cannot deter us from the fact that the production is ultimately heartbreakingly funny.

Blind Date is on at Jermyn Street Theatre until 31st January, for further information or to book visit here.