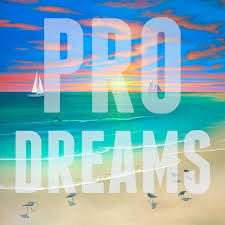 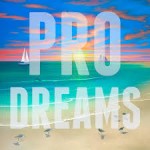 Pro Dreams is a surprising album that’s much more than what it appears to be. It’s a solid and escapist offering from the relatively new band FutureofWhat. The slow dreamy pace of this debut album lulls the listener into a state of relaxation from the onset, yet there is something deeper lurking beneath the surface. The Brooklyn-based trio create delicate melodies, yet every beat feels deliberate, evoking stronger emotions. Each song flows smoothly into the next, with FutureofWhat’s definitive sound running through. Lead singer Blair’s voice is breathy and light, allowing the lyrics and music to float through her. The pain of the recent loss of her younger brother is evident throughout the album; being able to write about it seems to offer her catharsis. Though the music is cheerful, the lyrics belie something darker, perhaps a dissatisfaction with life and a lack of purpose. In MLSBB we hear the lines “don’t look now, it’s all around. Everybody’s got their lost and found, fading but we don’t know why”. It’s lonely and questioning, yet there do not seem to be any answers.

This is reflected in Back to the City, with the lyrics “I was hoping that you were not broken. They said you would stay here, now I just lay here and cry”. There’s so much loss and loneliness running through the album, contrasting the breezy beach sound. This makes the desolation even more poignant, as though Blair is no longer certain about what to do with herself. The bubbly sound is a facade, or the positivity might just be the only means of saving her.

Double Thoughts sounds like a genuine plea, begging to escape from this dream world. The song ends with the disjointed clanging together of notes; it feels somewhat ominous, as though this might actually be an inescapable nightmare. Despite all this, Pro Dreams does have hopeful moments, as though it’s still trying to find its way.

Pro Dreams is released on 13th January 2015, for further information or to order the album visit here.