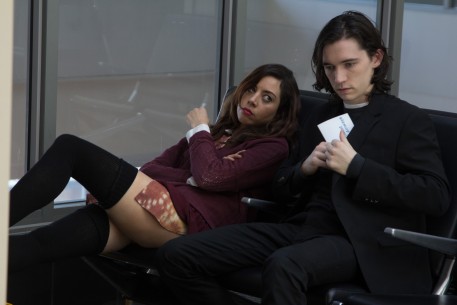 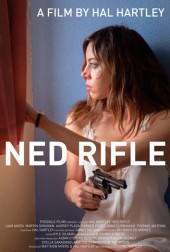 Completing his obscure trilogy (Henry Fool, Faye Grim) that never quite got the mainstream’s attention, Ned Rifle is an intelligent piece, containing all of the subtleties underground audiences have grown to admire in Hal Hartley’s work. Eloquent dialogue and a well-crafted narrative shape an ultimately pleasing film. The protagonist and title character Ned (Liam Aiken) is entering the world after a four-year absence in a witness protection program. This time in hiding has served Ned well; he was taken in by Rev Gardner (Martin Donovan) and his family, emerging a pious believer, albeit the kind more interested in hellfire retribution than forgiveness. Upon Ned’s release, the plan is to murder his incorrigibly hedonistic would-be author and father Henry, avenging his helpless mother’s undignified and extremely public incarceration.

With a plot so enriched, one would not presume this was such a character-driven film. All performances warrant praise, whether it is the reclusive former poet laureate uncle Simon (James Urbaniak), or the sultry and troubled soul Susan (Aubrey Plaza), whose deadpan wit and arresting glances perfectly complement the film’s already polished premise.

The musical score, while evident, is puzzling. An array of uplifting melodies and 90s TV movie-style riffs are enjoyable, but almost damage the overall production’s credibility.

While Hartley’s previous films have never had an interest in lush aesthetics, a genuine low-budget coat can be seen dressed over the piece, though this should not deter audiences from going to see this well-written and thoughtful film.

Ned Rifle does not yet have a UK release date.