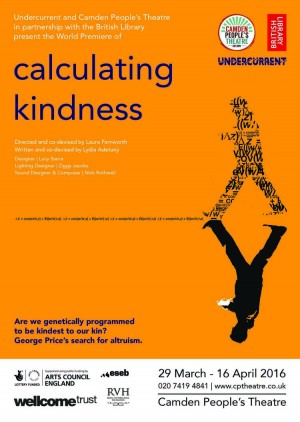 Calculating Kindness pays homage to the life of George Price, an American mathematician, scientist, and journalist who formulated an equation revealing the motives behind altruism. His findings suggested that acts of kindness have self-interest at their core, and that self-advancement is the main motivator for performing them. The final objective, Price believed, is the survival of our genes. Thus, just as every individualistic act is done with our own survival in mind, we are also programmed to engage in altruistic deeds benefitting those who share some of our genes, because it is genetically advantageous.

In the play, he moves to London and presents his idea with success, but personal problems and mental health issues begin to affect his work. Price is also troubled by the implication that kindness does not stem from genuine care, so he begins to help the homeless, giving away all his possessions, to prove that selfless actions are possible. He ends up living in a squat and nurturing unconventional beliefs that are largely misunderstood by those around him.

The action is set in a tight space filled with wooden blocks that double up as drawers and cabinets, revealing hidden props that determine the setting of each scene. The compact stage is fitting for the purpose of showing Price’s world. While the man led an interesting and varied life, the progression of his ideas is the main focus, and it best finds expression in this concentrated space. The music and lighting are cleverly used as extensions of his thoughts and are in perfect harmony with his darker times and his eureka moments.

Calculating Kindness does seem to lose itself a little, just as Price himself loses his focus, and this causes the play’s structure to weaken. The show’s strength, however, is that it brings to prominence an intriguing personality that has been largely overlooked, and in doing so, it presents fascinating notions about human nature and the question of free will.

Calculating Kindness is on at Camden People’s Theatre from 29th March until 16th April 2016, for further information or to book visit here.