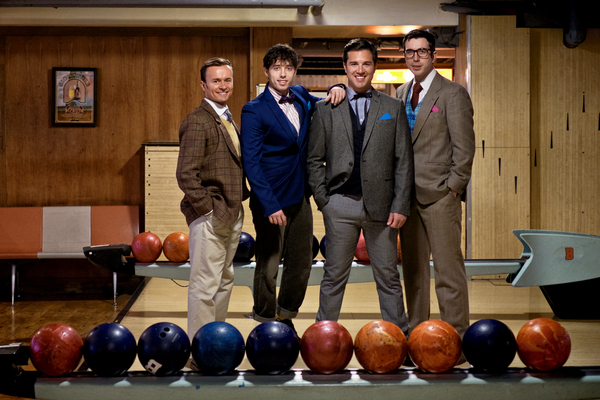 Like the goofy cousin of Jersey Boys (even if the original Off-Broadway production predates the tale of the Four Seasons by 15 years), Forever Plaid is an utterly charming take on that time before popular culture saw its truly seismic shift.

Sent back to Earth to perform the gig they were denied in life (the band were killed in a darkly symbolic bus crash with a gaggle of Beatles-seeking teens), the show tells the story of the Plaids, four boys with lacquered quiffs just at the start of their musical journey. Yet it isn’t all perky smiles and impeccable hair: there is a nice morbid strain of comedy running throughout (including a corpse-driven calypso), appropriate given the grim event that kicks the whole thing off.

Jon Lee (of S Club 7 and Les Miserables fame) is excellent as the exasperated band leader Jinz, whilst Luke Striffler is great as the rubber-faced funnyman and heart of the group, Francis. Matthew Quinn brings a gangly charm to his bespectacled double bass player Smudge, with Keith Jack adding a youthful naivety to the quartet. All four do a fantastic job of suggesting a bumbling, semi-professional band whilst remaining faithful to the crystal-clear harmonies of their real-world 50s peers. By the end of the musical, with the Plaids performing for one last time (literally), the viewer really believes their transformation from goofy kids to glittering stars.

It helps that the music is so great. Lee’s soaring Cry, coming near the end of the first half, is the undoubted highlight, nearly matched by the rich tones of Quinn’s Rags to Riches in the final flurry of songs. Crazy Bout Ya Baby, meanwhile, is a lovely bit of comedic choreography, the juxtaposition between the initial, plunger-filled performance and the polished piece that ends the play summing up the boys’ journey nicely. Grant Murphy’s direction is similarly superlative, making use of a tiny stage and not a lot else to portray a bevy of different scenes, including a three-minute version of the Ed Sullivan Show.

Like most jukebox musicals, Forever Plaid fails to inject any real narrative tension between all the songs; and there is a chance that if you aren’t over a certain age it might not be for you. But between the corniness and clumsy jokes there is bucketloads of charm and the Plaids take you to the stars and back.

Forever Plaid is on at the St James Studio Theatre from 5th until 24th April 2016. Book your tickets here.