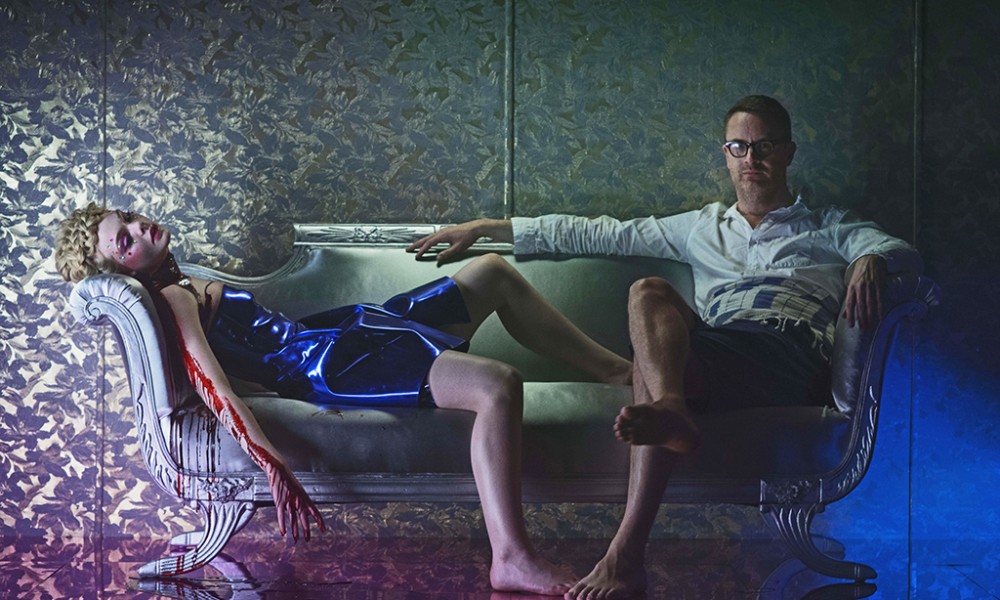 “For a number of years, I’ve had this interest in making a film about beauty, because, in my life, I’m surrounded by it,” Nicolas Winding Regn says, referring to his wife, filmmaker Liv Corfixen, his two young daughters, and, presumably, the myriad actresses and models he’s encountered directing both feature films and fashion advertisements for brands like Gucci, YXL, H&M and Hennessey. “And I see a lot of female empowerment with beauty.”

“The currency of beauty continues to rise and never falls. And, as we evolve the lifespan of beauty becomes more limited, while our obsession with it becomes more and more extreme. This obsession can often lead to a unique kind of madness.” To illustrate this, Winding Refn references Narcissus, the subject of ancient Greek myth who became so enamored with his own beauty he drowned in its reflection.

Known for both embracing and subverting such well-worn genres as the prison drama (Bronson), the historical adventure (Valhalla Rising), the action thriller (Drive), and the revenge drama (Only God Forgives), the Danish director was similarly curious to see if he could both honor and defy the “horror movie”. “Was there a way to hit all of the basic genre beats, but not necessarily in the right order?” And could he make a horror film without the horror?

To help give voice to The Neon Demon’s quartet of young female characters, Winding Refn sought collaboration with a young female writer – preferably one with a background in the more dialogue-intensive world of theater. He found these qualities in two writers: Polly Stenham, a well-known British playwright, and Mary Laws, an up-and-coming American one.

“Both women were absolutely wonderful to work with because of their differing approaches. And each brought a distinct perspective that helped mold the script in very interesting ways.”

The first and most pivotal role to cast was Jesse, a seemingly innocent young beauty from small town Georgia whose character slowly starts to transform as her modeling career takes off.  “To me, Elle Fanning is a blend of the greatest silent movie stars of the past and the most cutting-edge actresses of today. She has this magnificent ability to transform herself. And the camera just loves her.” To prepare for the role, Winding Refn instructed Fanning to watch a series of films – but not just in the horror genre. Like Valley of the Dolls and Beyond the Valley of the Dolls. According to the director Jena Malone became “very instrumental in creating the Ruby character because this character was more of an enigma at the script stage. So I needed someone that could transform and mutate into her.”

“The minute Keanu Reeves’ name came up, I was like, that would be the best. And it was a way for me to complete a full circle because Keanu and I had met about ten years ago on my first big job in Hollywood. That film never materialised… but I always wanted to revisit the chance to work with him. Very few actors have the pop icon status that he has and the ability he has as an actor, combined with a bona fide movie-star aura.”

“Then Desmond Harrington came in – I think two days before we were to start shooting that role – and when I saw him, it was more like, now there’s a mystery to Jack because Desmond is a very enigmatic personality.”

The director had been tipped off to Karl Glusman’s talent by filmmaker friend Gaspar Noé, who worked with Karl on the controversial romance Love. “I kind of put it off a little bit. And then Karl would contact me and I didn’t really respond. And we were running out of time and there was no actor that I wanted to use – so Karl came back from France and I said, ‘Let’s get him in and see how this works out.’ And Elle was going to be there for the reading. Their chemistry – from the moment he walked in the room – was so obvious.”

“It was a combination of two things: after shooting Only God Forgives in Bangkok, I wanted to do a film in Tokyo, and Liv said, ‘I’m not living in Tokyo.’ Then I asked her, ‘What’s a compromise?’ And she said, ‘LA’” In terms of the creative impetus for setting the story in LA, Winding Refn says, “I’d been doing a lot of fashion work in LA so I got to see the fashion side of it. And, even though you might say high-end fashion is more based in New York or Paris, every part of the entertainment industry leads back to LA. So you can say LA is the gateway between all entertainment and the rest of the world.

“One of the first challenges in LA is that it’s an expensive city to shoot in. So it was difficult getting a crew for the amount of money I had. But I think that forced me to…really go outside of my comfort zone and work with people who are much more new and fresh; people who were on the verge of breaking into the industry in a much bigger way, which actually added to the movie.”

“I spent two months finding the right set of anamorphic lenses and then fixing them because I chose a very old set that not a lot of people use anymore. They’re called “Crystal Express” and they were made by Joe Dunton, a legend in the anamorphic field. They’re great because they’re very soft and gentle and cosmetic on the faces. And I needed the skins to be as close to those captured on a fashion photo shoot – although those are always extremely corrected in Photoshop. But I knew on our budget we were not going to be able to treat the skins in post, so I had to do as much as I could in camera.”

Winding Refn describes the hiring of both production designer Elliot Hostetter and director of photography Natasha Braier as “absolutely crucial in designing and creating the film.”

When The Neon Demon finally commenced pre-production, Winding Refn told Erin Benach (costume designer) he wanted the film’s costume design to “really push the envelope and set the stage for high fashion – not fake high fashion”. This presented Benach with the dual challenge of both finding authentic pieces and then giving them an “elevated look that really feels like the high-fashion world”.

To cut The Neon Demon, Winding Refn enlisted longtime editing partner Matthew Newman, who helped bring such innovative editorial structure and texture to his last four movies. “When I first hired him (on the 2007 British TV movie Agatha Christie’s Marple), I never imagined that our paths would be so intertwined,” says the director. “But that was a great experience. And then I hired him to do Bronson and, from then on, he’s become very instrumental in helping me alter my ways of making films.”

“Matt doesn’t just edit my films during and after production; I bring him in during the script stage as a fresh pair of eyes to look at the screenplay and, later on, to supervise large parts of the post-production process.” “On Bronson, he stayed in a hotel room next to mine to do the editing; when we did Valhalla Rising he lived in Copenhagen near my house; when we did Drive, I edited it in my house, so he stayed with me; on Only God Forgives, I gave him a hotel room to edit it; and, for The Neon Demon, I put him up in my pool house, which is where we edited the film.”

“It helps me stay close to this force of creativity between us.” In addition to evaluating individual scenes, Winding Refn and Newman would also consider the overall shape the film was taking. “Because I was shooting in chronological order,” says the director, “I could see the film unfolding in front of my eyes editorially – not just photographically – and that sometimes necessitated rewriting and/or making other logistical changes going forward.” “So it wasn’t just about looking at stuff with Matt; it was also about asking ‘where are we in the story and how is it flowing and what new direction could it or should it take?’ For example, half way through the movie, I changed my mind about one character’s fate – and this was really the result of sitting with Matt and reflecting on how the film was living and breathing and transforming into whatever it was essentially going to be.”

To create the perfect musical soundscape for his first horror thriller, Winding Refn reteamed with Cliff Martinez, who previously composed the celebrated scores for his films Drive and Only God Forgives, as well as for his wife Liv Corfixen’s My Life Directed by Nicolas Winding Refn. Initially, Winding Refn filled his temp score with samples from the work of Hitchcock composer Bernard Herrmann (Psycho, Vertigo).

Martinez recalls: “It completely threw me because it was anachronistic; it was orchestral.” Bu the director quickly reassured him: “I don’t want the score to sound like that; I want it to feel like that.”

For The Neon Demon, Winding Refn includes a handful of licensed songs, including Waving Goodbye by SIA, whom he describes as “one of the most uniquely gifted female artists”, and Mine and Demon Dance by his nephew Julian Winding.

A rarity in the business – but common practice for the Danish director – the film was shot in chronological order.

“It’s a process I do for all of my movies because I like the fear of not being able to fully see how the film will turn out until the end,” Refn says. “It forces everyone to submit themselves because it’s a constant organism that needs to be handled and needs to be touched and felt. And every day there is possible change. And that can both be very terrifying and very exhilarating at the same time.”

“I think that LA has two realities: the so- called ‘real’ reality and there’s the ‘artificial’ reality. The artificial reality is the illusion of Los Angeles and that’s something I find really exciting because it’s about mythology.”