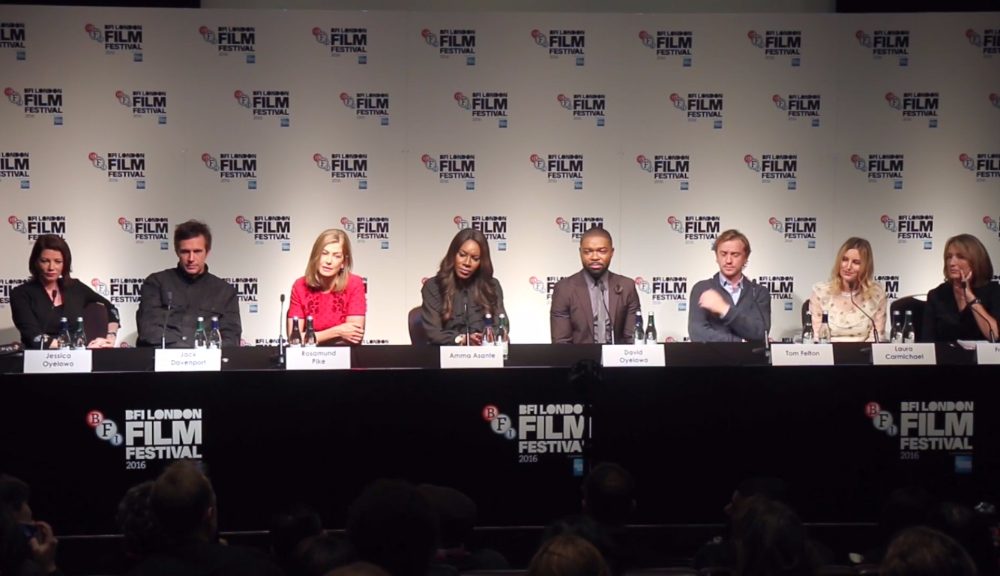 The 60th London Film Festival opens with A United Kingdom, a moving historical drama that charts the romance between Seretse Khama, King of Bechuanaland (now Botswana) and Ruth Williams, a London office worker he married in 1948. Their union sent shockwaves around the world, facing opposition from the governments of colonialist Britain and apartheid South Africa. The Upcoming caught up with David Oyelowo and Rosamund Pike – who play Seretse and Ruth – as well as director Amma Asante, and supporting cast Jack Davenport, Jessica Oyelowo, Tom Felton and Laura Carmichael.

The film was not an easy project to get off the ground, but was spearheaded by David Oyelowo, who found himself compelled by the story in Susan Williams’s book, Colour Bar. “It was the image of them on the cover of the book that arrested me: this young man in a trilby and trench coat, and this beautiful woman next to him. I read the book and it became an obsession with which I dragged anyone and everyone I loved working with and who I felt was talented and would share my passion.”

Rosamund Pike, too, found herself moved by the tale, and by the character qualities of Ruth: “I find her spirit so gorgeous. David wrote to me and he first sent me these photos … and there were these close-ups of these faces; I opened those photos before I looked at the script, and I was moved to tears by them … you saw the love, and you somehow underneath that saw what it had cost them.” Her character, she explained, “has tremendous pluck; I don’t think that’s a word we even use these days, – it feels very dated, but it’s such a wonderful quality … the certainty with which she undertook her love and commitment to her marriage, I found it inspiring.”

There was also a delicate balance between romance and politics to be maintained; scenes of the couple’s domestic lives are interspersed with the complex story of a struggle for political independence. Director Amma Asante explained: “It was very difficult, it was a constant balance right the way through development, through shooting the film … you can’t help asking yourself the question, ‘Is the balance right?’ I think it is, but for me, a love story allows you to bring the intimacy to the story, and the backdrop for me should always be political in some way, or big world in some way, universal in some way”.

A challenge from the supporting cast was to give realistic motivations to its villains, and to avoid a “pantomime” depiction of the worst aspects of the British empire. Jack Davenport explained that “this is not a wildly approximate version of how the empire behaved towards Seretse and Ruth, it was appalling … [the characters] are operating with a manual that is becoming increasingly out of date,” while Jessica Oyelowo explained that these people “fully believed what they believed in, they believed in etiquette and certain standards … you have to put yourself in their shoes and see that their world is crumbling.”

Tom Felton, not a stranger to playing “perfidious” roles, continued that his villain was simply “[a byproduct] of what the system entails at the time … it’s fear that they’re working out of, and they’re terrified that the status quo and the generations of hard work from their ancestors is going to go to waste.” He elaborated: “I find it quite easy to empathise with their position, despite it not really aligning with standards; to me, it shows a great way of how the shift happened, almost overnight.”

Laura Carmichael, a veteran of the period drama, plays a lighter role as Ruth’s sister, ands saw parallels of her grandmother in the characters: “Women who lived through the war have this bravery that surprised their parents, and that’s what you see with Ruth and her ability to love, and to think of what might befall later.” Her own character, Muriel, is “a bit more nervous, and a bit more straight-laced … but wants the best for her sister.”

One of the motives behind making the film was to tell a portion of history that had previously been neglected. It was particularly important to shoot in Botswana, explained Asante: “The sense I got while we were filming was that [Botswanans] knew this was a great story, but was an untold story, and a story that most of the world didn’t know about today … Most of what I got was a kind of relief, and of course a curiosity, as to how their country, and how they as people, would be reflected on screen.”

While shooting there, it also became clear that there was a generational divide; while older generations were aware of the story of Seretse and Ruth, the history had been lost on younger generations, thanks to what is taught in schools. “The residue of colonies is the history that ends up getting taught – and lost,” explained Oyelowo, “so it really made it doubly important to not only tell the story there, but get it right”.

Inevitably, the subject turned to diversity. BFI’s Black Star programme – a selection of films to showcase black talent throughout cinema history – feeds into this year’s festival, where diversity is a prominent theme. Oyelowo explained that a woman of colour directing this film “shouldn’t be special … but here we are. We are still in that place. But my hope is that when people see this film they will see themselves; they will see this country’s history; they will see us [Asante and Oyelowo] as people connected with African history, and how that inextricably intersects with British history, and why we are very proud to call ourselves British, or Africans – and with time, it will become less and less special.”

Asante added that it was up to “financiers, producers, wonderful actors like Rosamund, Jack, Jess, Tom, and all of the others who have chosen to come and work with us and contribute – [they] bring their weight to this story … the weight of their profile, the weight of their importance … so that audiences want to see these films.”

Another subject was the role of women, which was the theme of last year’s festival. Asante admitted that the number of women directors have increased, but not by a lot. “Somebody gave me the figure for black female directors – it had doubled from under 1% to about 1.4% … But as women, we’re not a minority. We’re 50% of the population. And we also play a large part in getting men to the cinema to watch these films, and often that’s to watch films that are about white men, between a certain age bracket. That’s not to say women directors should always direct women’s stories, but seeing the world through a female gaze from time to time shouldn’t be an odd thing. It’s definitely getting better, but it’s not good.”

A United Kingdom is released nationwide on 25th November 2016, read our review here.