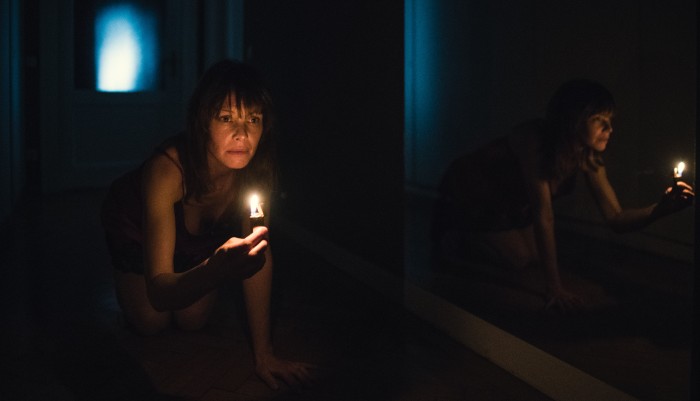 Domesticated animals have a strange relationship with humans, either being cherished, or slaughtered and then eaten. Human values and emotions are also imposed upon these creatures, and some dog owners might think that their beloved pooch is contemplating the meaning of life, whereas he is in fact mildly constipated. This reflecting of moods and values onto animals is a device that is well utilised in Tiere (Animals), the new film from Polish-born director Greg Zglinski, although it’s really not as straightforward as that. In fact, it would be a stretch to consider almost all of what happens in this movie as being straightforward.

Nick (Philipp Hochmair) and Anna (Birgit Minichmayr) are on their way to Switzerland, making the journey by road from Vienna. A collision with a sheep leaves them both shaken, and it’s here that what could be a traditional narrative begins to be affected by sheer oddity. The day after they finally (seemingly) arrive, gaps appear in Anna’s memories (she’s informed that they in fact arrived 12 days ago), and Nick becomes vaguely obsessed with the dead sheep. It’s as though there is almost a merging of possible different consciousnesses, of events that might be real or entirely hallucinatory. This recalls the work of David Lynch, although Zglinski’s film is not a copy, and it would even be too much to call it an homage. A key scene also brings memories of Alfred Hitchcock’s The Birds in a somewhat unsettling moment when the couple are once again besieged by animals.

And the movie does have an unsettling undertone, while still being infused with brilliantly dark humour. The way that the narrative unspools is difficult to follow for the audience, and yet it’s just as difficult to follow for Nick and Anna, whose lives are crumbling in a weirdly selective manner. Tiere (Animals) might wander too far off the beaten path for some viewers, but getting lost in this surreal and somewhat ominous world is an experience that is certainly unique.

Tiere (Animals) does not have a UK release date yet.