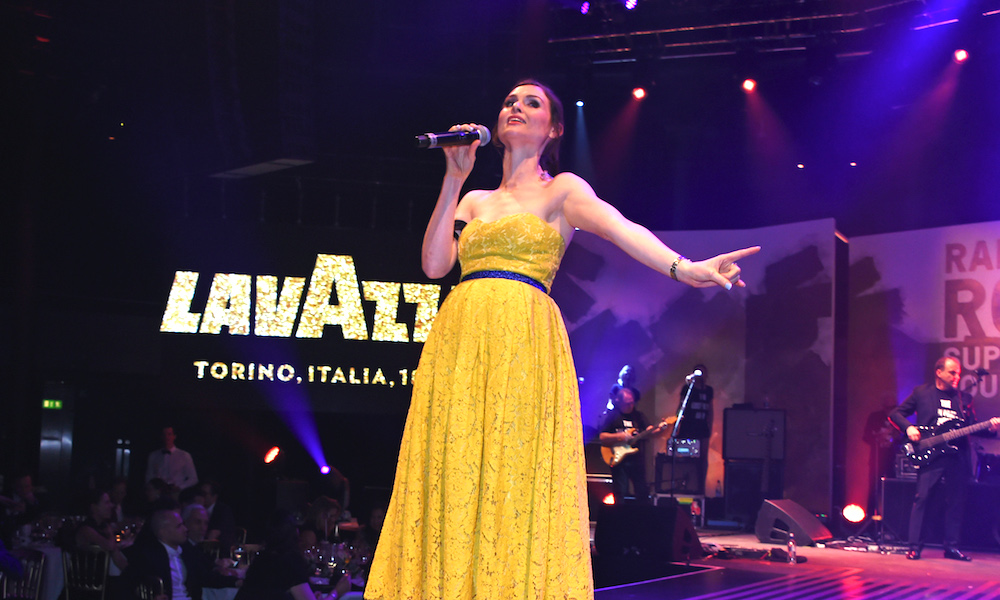 Last night was the glamorous biennial Roundhouse Gala: a star-studded affair which raised thousands in funds for the iconic Camden venue’s outreach work, with a focus on supporting disadvantaged young people gain skills and experience in the arts.

Hosted by the lovable fashionista and presenter Fearne Cotton, the event brought together legends and newcomers of music for a night of entertainment and fundraising auctions while an A-list room of attendees tucked into a lavish three course dinner and flowing booze.

Roundhouse ambassador Sally Wood dazzled in a black and gold gown, speaking passionately to the audience about the cause the gala was in aid of. Her partner, music legend Ronnie Wood, performed a duet with the fantastic vocalist Imelda May before auctioning off a guitar signed by none other than The Rolling Stones, while his son Jesse Wood opened the night with a collaboration between his band Reef and the Roundhouse choir. Roundhouse’s homegrown talent performed spoken word and told stories of how the venue’s programmes had turned around their lives and X-Factor’s Matt Cardle sang cover numbers with the Trevor Horn and Guy Pratt house band. Former rugby player Martin Bayfield was charismatic as the auction lead, encouraging the elite crowd to dig deep to take up lots such as tickets to phenomenally successful musical Hamilton and lunch with Monty Python members. The Who’s Roger Daltrey and Wilko Johnson closed the night with a wildly energetic blues set before the eclectic crowd rushed the stage to dance the night away with espresso martinis and leftover champagne in hand.

We were there to rub shoulders with the celebs in attendance – newly knighted Kinks’ frontman Ray Davies, Jimmy Carr and Barbara Windsor included – and soak up the atmosphere of the charitable event. We were lucky enough to steal a few minutes with the stunning Sophie Ellis-Bextor ahead of throwback to 2001 with a knockout performance of Murder on the Dancefloor. Sophie told us why she thinks it’s important to support young people get into the music industry, how it’s changed since she first embarked on her career and the joy of working with Tim Rice on her track for movie The Time of Their Lives.

TV personality Jeremy Clarkson was also there to offer up a day on The Grand Tour race track for auction and had some characteristically cutting comments for the BBC: “When I came here two years ago I was working for the BBC. And I know the director general is sitting over there now shitting himself – don’t worry Tony, this is fine. And I came on this stage to offer up an auction prize. I may have said some choice words about some of the BBC management, and I was sacked. As a result of that I’ve really done very well for myself because now I’m at Amazon. So this place really does turn your life around. You lose!” We had a chance to speak with him beforehand about filming the next installment of The Grand Tour, the secret to longevity in his career and of course his favourite movie.

We also chatted to Sadie Frost, a longtime supporter and fan of the venue as a Camden local, director Gurinder Chadha, passionate about ensuring a diverse and rich UK cultural scene and tennis legend Boris Becker who was offering up a lesson as an auction prize.

A raucous night of entertainment whose fundraising efforts will ultimately give thousands of deprived young people the chance to experience and build careers in the creative world. Indulgence with heart.

For further information about the Roundhouse visit here.