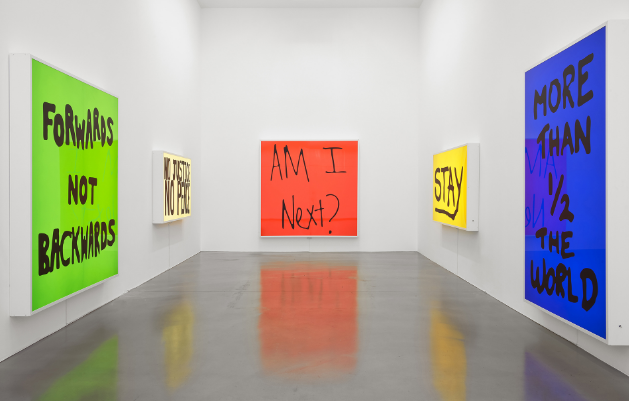 His fourth exhibition at the Sadie Coles Gallery, American multimedia artist Sam Durant’s latest show is a collection of protest slogans lifted from various image archives of international protests and demonstrations. By stripping them of context, digitising them and displaying them like ads, he depoliticises them, ready to be re-appropriated by the audience.

Once rooted in political immediacy, the glowing panes bellow open-ended propositions or questions into the stark gallery space, and force the viewer to consider their dispassionate significance devoid of meaningful circumstance. The artist re-articulates the protesters’ statements, and puts them into formats typically used for commercial signage. By exaggerating the handwritten quality of the messages, Durant emphasises the idea of personal expression and its fluid interpretation based on location and tone.

The absence of direct connotation here is in many ways liberating; Stay can be interpreted as a reaction to Brexit, or something much more personal and emotional, reflecting individual ideologies and expressions, while revelling in the playful subjectivity the pieces create.

Coupled with strikingly bold colour, the maxims delicately toe the line between minimalism and reductionism as they play with the emotive lexis we associate with the picket line.

In many ways a symbol of the urbane anarchy reserved for the middle classes, the urgency of the messages here are lost in the sterile display space, where the tight modulation arguably diminishes the narrative, especially when compared to Durant’s work End White Supremacy, displayed on the front of the Paula Cooper Gallery. There, it was wonderfully provocative; originally handwritten on a sign and carried during a civil rights protest in New York in 1963, it took on a new and modern meaning, blasting a dialogue often forgotten in our era of smug pseudo-equality, while reinforcing the artist’s statement that “History is ongoing”. This social impact is lost when taken into a formal gallery space; the work feels clinical and derivative despite having the potential to be incredibly powerful outside of its gilded cage.

Sam Durant: More than ½ the World is at the Sadie Coles HQ from the 15th March until 13th April 2017, for further information visit here.