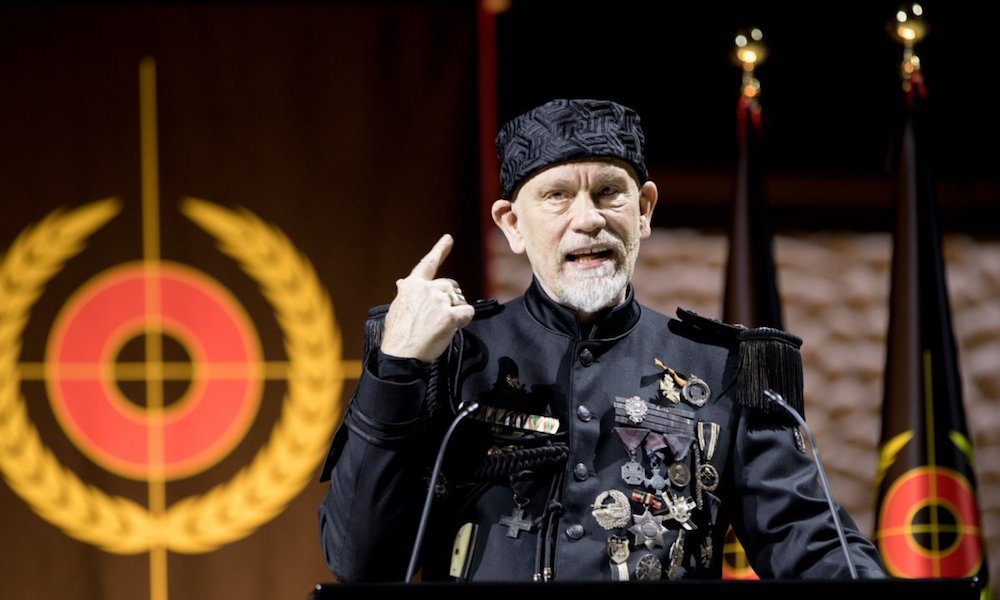 John Malkovich is no stranger to dark roles, so it is no wonder that he has become a sort of muse to writer-director Michael Sturminger. After exploring two extremes together – a serial killer and Casanova – their third collaboration sees them carry on the theme of extremism. Just Call Me God: The Final Speech of a Dictator premiered in Hamburg earlier this month, and the London stop of its European tour is taking place in the charming Union Chapel. Even before the show starts, amid the bustle of the audience finding their seats, the chapel makes its presence felt and creates a special atmosphere.

While the venue does half the job, Malkovich does the other. He plays Satur Diman Cha, a dictator in hiding who has recently lost all his power. When a group of soldiers and a bold female journalist, Caroline, enter his palace, he attacks them and leaves most of the party for dead. In an attempt to save herself, Caroline challenges the ruler with an impromptu interview, declaring that she is interested in his side of the story. A surreal power game ensues.

The surprising element of Just Call Me God is the number of scenarios normally associated with high tension, if not terror, that become laugh-out-loud moments. Malkovich is superb in veiling the sinister core of his character with waves of sheer hilarity. The play sits somewhere between theatre and cinema, with cameras on stage and a large screen above the action showing close-ups and otherwise unnoticeable details. Malkovich is totally at ease with this double perspective and masters both mediums.

It is very clear that Sturminger created Satur Diman Cha around Malkovich, because the role fits him like a glove. The play seems to rely too heavily on its protagonist however, and it sometimes becomes apparent that without him it would not hold up half as well. Even when he goes off stage for a few moments, it feels as if a magic spell is momentarily deactivated.

Since the subject-matter is not fresh, the execution ought to be wildly imaginative to justify its existence. The main character is essentially a medley of dictators, but condensing all the despots into one does not make Satur more powerful, only too generic to offer much beyond an (admittedly fine) caricature. The problematic factor of depicting a dictator is that this figure has become the villain par excellence, and two-dimensional baddies have never fared too well.

Overall this is a rather weak production magnificently supported by the strong presence of Malkovich, the aura of the venue, the light humour, and conductor Martin Haselböck’s organ concerto. These elements lift Just Call Me God up and make the experience worthwhile.

Just Call Me God: The Final Speech of a Dictator is at Union Chapel from 23rd until 25th March 2017. For further information or to book visit here.

Just Call Me God: The Final Speech of a Dictator