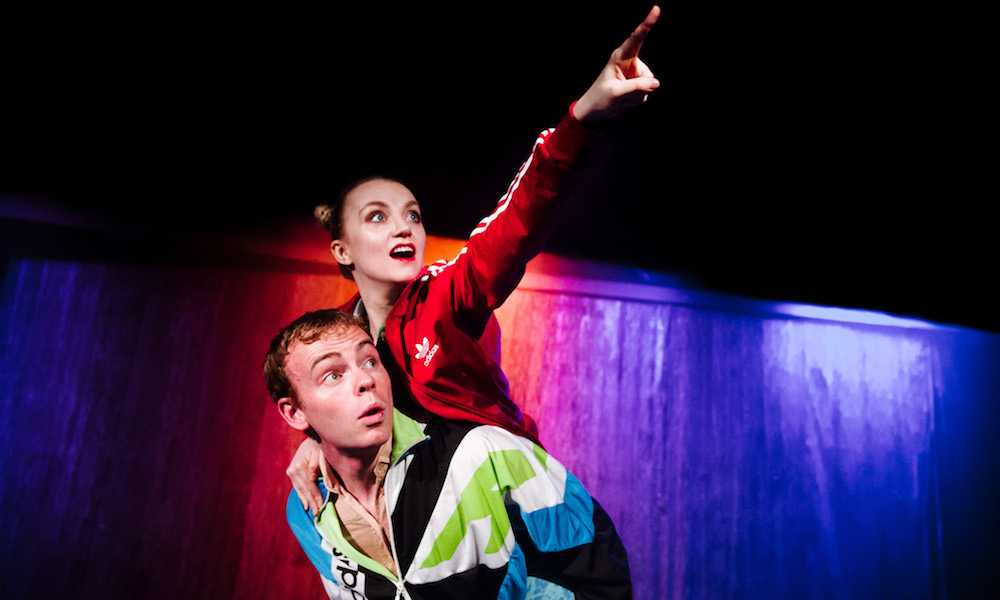 July’s a pretty savvy time to revive Enda Walsh’s Disco Pigs. The sweaty summer months are a period of great transition for teens across the country. In shifting from school to college, or college to uni, we can end up questioning the value or healthiness of friendships that have sustained us for years. Ideally people grow and change in the same direction. What happens when they don’t?

Wriggling, slick and screaming, into the world within seconds of each other Pig (Colin Campbell) and Runt (Evanna Lynch) are effectively non-genetic twins, even sharing their own mangled version of English. They also don’t have any other friends to speak of, breeding a co-dependency that might be beginning to crack. There’s a melancholic tinge to their 17th birthday celebrations, a sense of suffocation and yearning lying just below the boozy haze.

As Pig, Colin Campbell is an absolute diamond find. He lurches about like a dim, slightly more benign version of Alex from A Clockwork Orange – there’s also a touch of Nadsat to Walsh’s language – raging with the impotence of adolescence. Yet there’s a sweetness underneath his gurning grin and flash-paper violence; he’s like Runt’s lovesick puppy, yapping and snapping at her heels (no more is his dog-like status felt than in the play’s final moments).

For a while Lynch struggles to keep up with her co-star. It’s hard to tell whether her sometimes subdued performance is related to character – after all Runt is getting sick of their antics – or an inability to rise to the mania the script requires. She does shine, however, in the quieter, sadder moments; it’s just a shame Walsh is so stingy with scenes showing Runt’s burgeoning doubt.

Director John Haidar gives the production the same punky, tender heart as something like Our Ladies of Perpetual Succour, bringing the right amount of witty, kinetic energy to Pig and Runt’s birthday bash. A special hand must also go to the lighting and sound design of Elliot Griggs and Giles Thomas for producing a classic big night out without any real visual aids.

For a play that’s 20 years old there is nary a wrinkle on Disco Pigs. That’s in large part because Walsh’s language captures how sacred teen-speak feels to the participants, and how incomprehensible it sounds to most adults, without tying it to a specific period. Like the narrative itself – all growing pains and unrequited love – the piece balances the buzz of youthful daring with a shot of emotional nostalgia.

Disco Pigs is at Trafalgar Studios from 12th July until 19th August 2017. Book your tickets for Disco Pigs here. 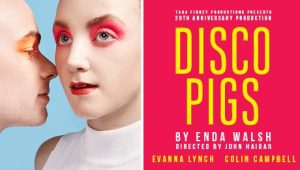