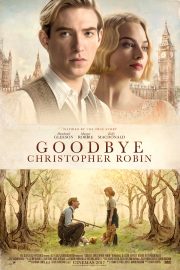 Simon Curtis’s new film, Goodbye Christopher Robin, succeeds in shining an all-important rare light on what was – and arguably still is – an overlooked relationship within the fantastical world of Winnie the Pooh. It is the relationship between the author of the book, Alan A Milne (Domhnall Gleeson), and his son, Christopher Robin (Will Tilston). The toys of his young son – the famous group of bear, piglet, tiger and donkey – not only star as inspiration for a recently returned war veteran writer suffering from severe shell shock, but also as national images of hope and perseverance, at a time when England was suffering most after World War I.

However, as the Winnie the Pooh utopia seems to grow in international success, the enchanting tales – carrying with them the weight of national morale – seem to have a poisoning effect on the close-knit family. As a struggle between humble family roots and international fame takes off, the Milnes, with priceless affection and help from their nanny, Olive (Kelly Macdonald), must overcome an internal struggle, leading to now-grown-up but still innocent Christopher’s departure for the Second World War.

This film is not all bucolic forests and fictional animals parading in the woods. It delves deeper into the origins of the book, and some of the reasonings behind Milne deciding to write the much-loved children’s stories. Gleeson succeeds in his role as a war-stricken individual, and his bouts of trauma-induced rage are choreographed superbly, particularly with the subtle experimentation with the sound score, merging both fiction and reality together seamlessly. However, the feature does slightly lose the sensibility it holds throughout at times when we focus too much on the life of young Christopher and his sensitivity to the outside world. It is a vital part in the story (as it should be), but perhaps the film could have benefited from delving deeper into the psychological life of A A Milne, particularly at the time when he saw his own son as a simple commodity. Nonetheless, Goodbye Christopher Robin is a heartwarming drama that balances nicely between the harsh realities of post-war Britain and the escapism of rural utopian forests and speaking animals.