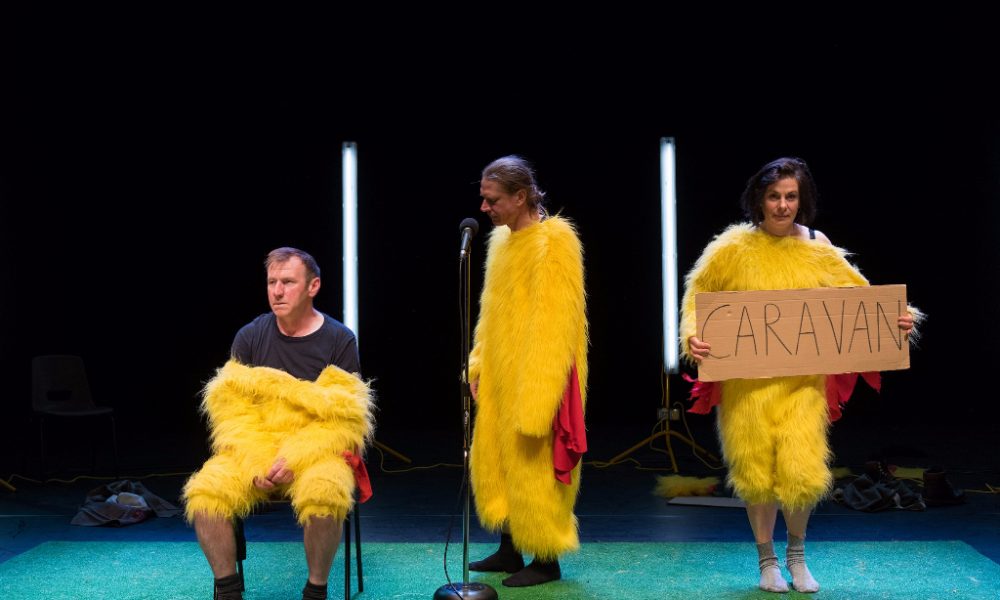 Forced Entertainment are an experimental performance-art troupe, who have been appearing together for 30 years. According to their website, their work “tries to explore what theatre and performance can mean in contemporary life”. A bold statement; they are clearly not out to entertain the masses. A blend of surreal comedy and frustration, Real Magic is typical of their work, but far from typical output.

Three performers are on stage in an uncomfortable, looping game show. It’s all very dark, though to talk in any detail about what actually goes on would be to ruin it for anyone who hasn’t seen it – but the butt of the joke is definitely the audience. The repetitive nature of the show, the laughing tracks and intentional overacting leave theatregoers exhausted and confused at times. There are scattered laughs throughout, some of the spectators pleased to be in on the joke, some moments are genuinely funny. It’s the typical mixed bag of responses earned during performance art. For long stretches, the reaction of the audience is silence, they are quietened by strangeness.

The piece is edgy on that level where one needs to be interested in seeing something different. Do not come and see this show after a bad day at the office, you will be annoyed. There is no swearing, no nudity, no violence, no references to anything that is unsuitable for children, but this is unsuitable for younger audiences.

Forced Entertainment are famous within their scene, more or less unheard of outside of it. This small run has sold out already, from a devoted fan base, made up of people who know what they’re letting themselves in for. This kind of devotion can often lead artists into woeful areas of self-indulgence and it’s difficult to say if that’s what this is. It’s too self-aware to be accused of complete self-indulgence, but too indulgent to be called entertainment. It’s interesting, daring and brave, but fundamentally it’s too painful to be enjoyable.

Real Magic can’t be compared to most shows, it’s not escapism, relaxing or funny in the conventional sense. It plays to an audience in an art school theatre, almost all of whom are excited to a see a cast they’ve probably studied – so unsurprisingly it goes down well.